Exhaust Burglary: Investigate. If you succeed, instead of discovering clues, gain 2 resources, +1 additional resource for each point you succeed by (to a maximum of +3 resources). 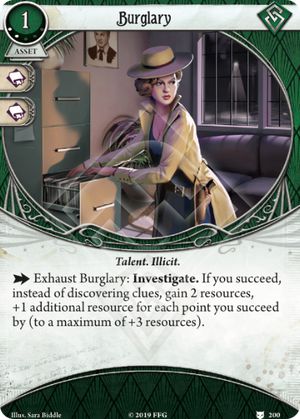 I have to agree with the consensus that this card is a bit strange, but I don't necessarily think it should grant clues or some such. I do think it could be altered to scale differently. Here's how I'd house rule it:

The text would read: After you successfully investigate, exhaust Burglary and gain resources by however much you succeed by, to a maximum of X. X is the printed shroud value of your location.

This version would offer the benefit of not forcing you to "waste" an action investigating to get resources, you'd just get them as a result of successfully investigating like normal. The number of resources you'd gain would be quite low most of the time, but you probably won't be spending a lot of extra cards or resources to succeed by a large amount anyways, certainly not on low shroud values. High shroud locations can net you far more resources, but you would have to succeed by that much more in order to get them. The function of the card is not to net you a large chunk of change; most likely it will trickle out resources as you investigate along the way (and the exhaust keeps it from being too overpowered). Note that I would emphasize "printed" shroud value to allow cards like Skeleton Key to combo. You could essentially hack the shroud value, but still gain large quantities of resources in this way. It might need to be lvl 3 as opposed to 2, but if it means the card sees play rather than how it is now, then I think it'd be worth it.

But enough tooting my own horn. The card as is, does have some viability. Finn might like it, or anyone playing Fence since you can get it up quickly and then snag some dough whenever you have a spare moment at a low shroud value. You can still combo cards like Double or Nothing and "Watch this!" to heap a pile of cash, and I suspect this is probably the instance it'll be used (Boss Leo would probably love this). The problem, of course, is that while you can net a grand total of 16 resources this way, you could get 12 with Burglary lvl 0 which I would think is plenty. So I guess I'm back to being confused over where the allure in this upgrade exists.

Typically characters need combos and techniques to deliver successful investigate actions, a card that depends on these actions to do anything at all is never goign to be a good for a who'se is less than 4 (on that note, try the 0xp variant in a Rex Murphy deck, all of a suddent you trigger Burglary on every test where you're going after 1 clue anyway and the card becomes a powerhouse.

If Burglary is to be changed to be useful at all, it needs to deliver clues alongside the money, or something other then just money. Perhaps a 1-round shroud reduction?

Whatever it is missing, Burglary just isnt delivering, not because it doesnt deliver enough resources, but because resources alone will never be useful enough to jump through the huge number of hoops that you must to make the card work.

Tsuruki23 · 1991
Still not loving this card but I am seeing some potential for a high economy deck for Finn. He runs Lola with Well Connected and/or High Roller as assets. He is at a static 5 or 6 plus 2 or 3 with WC/HR. Profit 2-5R (usually at the high end) on 2-3 shrouds. Combo that with LCC for card draw. What will Finn use all of those resources for? Run Delilah and Lola together. Not sure if I really love it but I see some potential. — TWWaterfalls · 729 4/3/20
Waterfall, that's a lot of work for just simply winning an investigation to get a clue. But it does give a lot of flexibility that maybe shouldn't be overlooked. — jdk5143 · 94 4/3/20
It would be a good support card for decks that use ressources for everything (like money talks or well connected), but most who can use it have really low INT and hardly access to permanent INT boosts. — Django · 3498 4/3/20
I did say that I didn't really love it but it starts getting feasible with Finn specifically since he starts at a 4 INT and adding Lola synergizes with needing a high resource engine. Add in Delilah for a very useful way to spend those resources and it doesn't look too bad. — TWWaterfalls · 729 4/4/20
3

This cycle has been really good for success rogue so far, but I don't see this performing particularly well.

If you have streetwise, and would succeed at the skill test without any investment, then you could spend 2 resources to gain 5, which is 1 action for a net gain of 3 resources.

That's assuming you don't need to pump up your intellect to pass the skill test reliably in the first place. And 1 action for 3 resources isn't THAT great in the class that gets lone wolf and hot streak.

If this upgrade reduced the shroud value instead of giving you (Potentially!) more resources, I'd call it a huge win. As is... kinda bad.

xeynid · 21
Lola exists, well connected exists, Skids exists, Money talks exists, High Roller exists, skeleton key exists.... there’s lots of ways to build into this card that can have you skyrocket in money without slowing down tempo. Unfortunately the build sounds terribly *boring* but weak? I don’t think so. — Difrakt · 1000 1/10/20
Most of those things are things you could just use to get a clue at that location. I don't think the moneybags build is weak, but are you really gonna spend an action investigating to get money to spend on lola grabbing the clue? Why not just grab the clue, then? — xeynid · 21 1/10/20
Rogues have more reliable ways to get resources, and Burglary has never been very good to begin with outside of Rex (who can't take this version) or a single infinite combo deck with Jenny (that taboo dismantles). I think the best thing this version of the card has going for it is an enabler for Well Prepared Skids to investigate at +2 without crowding hand slots. You could spend 2 resources to take an investigate action also and make some profit possibly, but it's risky. — StyxTBeuford · 12436 1/10/20
2xp is where a card really starts needing to pull its weight to justify the cost. This card just... doesn't. Too many other better options in the slot. It's a shame they didn't add Fast to the upgraded version; that would have made it worth considering. — Amante · 3 1/15/20