Spawn - Location farthest from you.

Forced - At the end of the enemy phase: Add 1 token to the chaos bag. 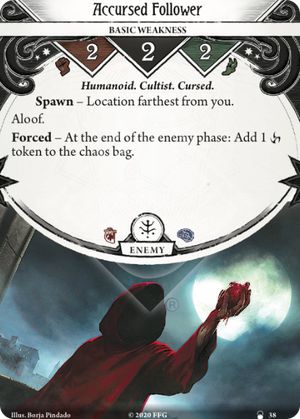 This seems like a basic annoyance rather than a basic weakness. They aren’t going to kill you or blank cards or add doom; they are just going to sit in a corner and cackle at you, making your life just a little bit worse, and being a pain to get to and kill.

Always assuming you don’t have an use for Curse tokens (eg, The Eye of Chaos), in which case they are kind of nice to have lurking all Aloof off in a corner, like a nice aunt, except with more human hearts scattered about.

I suppose they could pick up doom from Mysterious Chanting and the like, so they might be more of a threat in some scenarios.

LivefromBenefitSt · 937
Yeah, much like Dread Curse, this doesn't really hurt that bad at all. I think it is slightly worse than Dread Curse in either a curse loving or curse apathetic scenario. In the former, you probably want a burst to fuel something, while in the latter, you'll likely just have more curse to deal with in the course of a scenario. But overall, pretty tame. — StyxTBeuford · 12744 10/6/20
2

This is one of my least favorite weaknesses in the game.

Not that Accursed Follower is particularly tough. On the contrary; he has basically zero immediate impact, which is a very good thing in a weakness. It will take a good amount of time for the Curses to have any noticeable impact on the scenario; if you draw him later on there's every chance that the scenario will end before the Curses swing a single test. Occasionally he can have vicious interactions with Mysterious Chanting or something like that, but that's not too common. Plus there are a wide variety player cards that benefit from his Curses.

No, what I dislike about this card are the severe memory issues it causes. This guy spawns as far away as possible on the map and never moves or really does anything consequential. It's like he's designed for you to forget about him. And so almost unfailingly, at some point in the scenario someone in my group will end up saying, "wait, we forgot to put a Curse in the bag last turn. Hmm, how many turns have we forgotten about him?" Honestly, I can barely remember Sister Mary's investigator ability when I play her--and the designers expect me to remember this guy adding a Curse at the end of the enemy phase on the other side of map? Not happening.

CaiusDrewart · 2816
We had the same problem, and started stacking the curse tokens on top of the encounter deck, so they get into the bag at least in mythos phase. — Susumu · 271 1/19/23
its a bit late in the design now, but it would be nice if cards with forced effects had like a clear symbol that caught your eye, those bold six letters just aren't enough sometimes. — Zerogrim · 262 1/20/23