Revelation - Put Leg Injury into play in your threat area.

Leg Injury can be healed as if it were a single point of damage on you (if it is healed, discard it).

Forced - After you take a move, resign, or evade action: You cannot take any of those types of actions for the remainder of the turn. 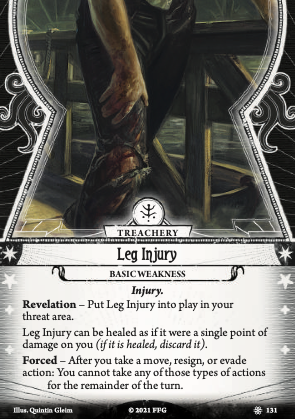 Low movement classes that aren't going to be jumping around the map much anyway like Guardians and Mystics won't really care this is there. Your evasion based rogues or seekers with movement bonuses are going to notice this, but usually just making a simple deck swap (throwing in a painkiller) is enough to get rid of this.

Given that most weaknesses on average make you lose two actions to resolve, this one is pretty weak and is almost trivial.

drjones87 · 60
Most seeker movement bonuses aren't move actions, so aren't even affected by this ^_^ — NarkasisBroon · 9 2/15/22
And then you might as well stay in the Asylum... I agree, though, that some classes have pretty good mitigations. A Guardian with upgraded Safeguard might as well ignore it most of the time. (But an Arm Injury is quite a pain for that gator!) On the other hand, an evasion based character will be more disturbed by that. Evading and Moving are commonly used both in a turn in this case. — Susumu · 211 2/15/22