Matthew Cowdery
The Blob That Ate Everything #31. Mi-Go Incursion #11. 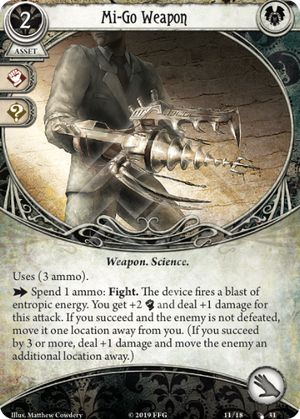 Have you ever wanted to play pinball with a boss? Well, look no further, because this gun will send enemies flying every which way around the map, leaving your teammates with more time to run around looking for clues!

Of all the investigators, Mark with his base 5 can probably get the most bang for his buck with this nice piece of alien tech - and, with a perfect combination of The Home Front and Vicious Blow, deal a whopping 6 damage while also acting as a personal chauffeur for any unlucky bastard to be on the receiving end of that deal and still be standing. I think, though, that any combat investigator worth their salt really wants to pick this one up for their own decks.

supertoasty · 24
It is kind of funny that this card actually works on Elite enemies. Probably not intentional. Tony might be a good choice for it because he can trigger other succeed-by effects at the same time as this one — Zinjanthropus · 205 3/11/21
If you are very successfull, are you mandated to move the enemy away of 2 locations? — el_kloklo · 1 2/20/22
Yes, because you are told to move the enemy away, not that you "may" move the enemy away. — Signum · 12 3/28/22