Defeat a non-Elite enemy at your location with 2 or less remaining health. Then, heal all damage from Pet Oozeling, place 1 resource on it, and reveal X chaos tokens, where X is the number of resources on it. If an symbol is revealed, you are defeated and suffer 1 physical trauma.

WARNING: DO NOT FEED OOZELING UNDER ANY CIRCUMSTANCES
Tiziano Baracchi
The Blob That Ate Everything #30. Mi-Go Incursion #10. 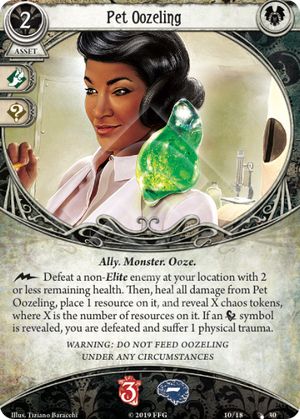 This card. This freaking card. Hey, did you know that its triggered ability isn't a skill check, so symbol tokens revealed for it don't weaken Seal of the Seventh Sign? And that, as a result, while the token is sealed, there's no risk involved in activating it?

Yeah. This card is far more powerful than they probably intended if there's a Mystic on your team. Even without the ability (because relying on that ability without any chaos bag manipulation is ... not a good idea), a 2 cost story asset that doesn't take up any slots for 3 soak is a fairly strong reward. But the moment you add any chaos bag manipulation, even just a Premonition, Grotesque Statue, or Olive McBride to let you use it once for free, you're getting a massive tempo advantage. And if you actually do the Seal of the Seventh Sign combo I alluded to above, you can use it to take care of the last two health of every enemy that shows up forever... or at least until the skill checks being done to advance the investigation break the Seal.

Of course, that does leave the issue of actually finding the dang thing in its side scenario, since, of course, it's a story asset...

Thatwasademo · 32
Wendy can also guarantee safe usage of this asset if her ability is available, since you do not replace the drawn token for Wendy’s ability — Difrakt · 952 7/14/20
Wendy's ability reads: "When you reveal a chaos token, choose and discard 1 card from your hand: Cancel that chaos token and return it to the bag. Reveal a new chaos token." So while she can use it for this ability, there's no guarantee Wendy wouldn't put the autofail back only to draw it again. — zrayak · 71 7/14/20
I bumbled into this by accident (I had never played the scenario before) playing as Jacqueline Fine. Jacqueline Fines investigator ability is "when you would reveal any number of chaos tokens, reveal 2 more, you may cancel the autofail". Yeah... That combo is outrageous. Even more outrageous than Preston Fairmont with Monstrous Transformation. — NarkasisBroon · 1 7/14/20
Preston with Monstrous Transformation is way less outrageous than Calvin Wright with Monstrous Transformation. — Death by Chocolate · 621 7/15/20
They are both pretty silly, but personally I think Preston is worse (better? More game breaking.). Once you reach a certain point having higher stats doesn't really matter (the difference between like 6 before boosts and 10 before boosts). But the action compression that comes with being a rogue and having 5-6 resources a turn, AND being 6 before boosts is tremendously potent. — NarkasisBroon · 1 7/16/20
It also combos with Calling in Favors. You can clear the resources off of it, and also get an ally into play. — Zinjanthropus · 157 8/23/20
2

Currently playing return to forgotten age with William and Trish. We played the blob after the second scenario and William got the small blob. I must say, it's totally OP!

Not being eaten (avoiding autofail)

Making it smaller (Remove ressources on it)

Side note, Calvin likes trauma so does he like being eaten by it?