When the game begins, if The Fool • 0 is in your opening hand: Put it into play. 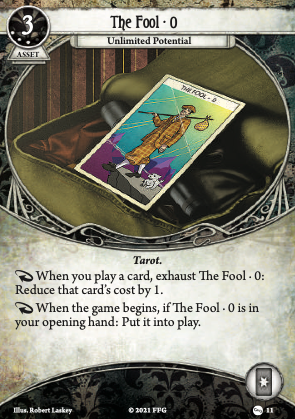 One problem is that The Fool is 3-cost asset, which is hard to play Dark Horse deck in the middle of the game. Luckily, here is a solution; if you find Fool in your opening hand, you don't need to concern this. What you need to do is improving your drawing ability :) Of course, my drawing ability is too poor to find; my Fool always places among the bottom five cards.

elkeinkrad · 311
I feel like the 3-cost investment actually isn't that bad in a dark horse deck, since dark horse itself costs 3. Whichever you get first, you can just play, and paying this has the benefit of making Dark Horse cheaper. Seems solid to me. — SGPrometheus · 636 7/15/21
I tried this card in a Bob Jenkins deck, and found it lackluster. Yes, it's great if you have it in your opening hand. If not, you'll have to take a tempo hit (three resources!) to hopefully make a worthwhile return later on. Opportunity costs means that paying 3 resources, a card and a play action in round 3 isn't always going to be worth saving 10 resources during the entire length of the game. Also I think it's overpriced at 3 Xp. — olahren · 1920 8/4/21
Agree... on it's own, it's IDEALLY a net +1 R/turn... and that's only realized if you can play at least 1 card per turn. Not bad in a vacuum, but 3R 3XP? Tempo-wise, if it's not in your opening hand, it'll be 7 turns before it competes with a single Take Heart. That said, as OP suggests, it really feels built for the niche of lifting the operating bar of a Madame LeAxehorse deck from 2 to 3. — HanoverFist · 508 9/5/21
I just realized this card is almost the same as the card resourceful in the lotr card game. Niche but works great in a hobbit deck. This has me thinking a deck likely exists where this is a really good card as well…not sure what that looks like yet though. — spoonman2084 · 1 10/26/21