While Vengeful Hounds is engaged with you, you cannot draw or reveal cards via player card effects.

"On those rare occasions when a man escapes the Hounds, he doesn't always stay escaped. Sooner or later, they're apt to come after him." - Richard Lee Byers, Ire of the Void
Reiko Murakami
Ire of the Void #9. 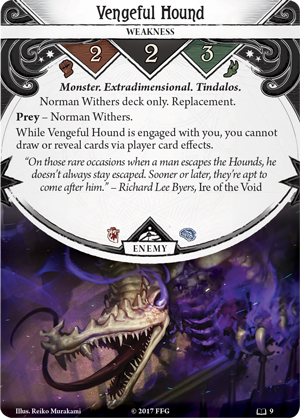 As far as investigator-specific weaknesses go, Vengeful Hound is relatively mild. I would say it is most like the basic weakness Stubborn Detective in that it effectively blocks out Norman's special ability.

The differences between Vengeful Hound and Stubborn Detective:

I think this weakness was made weaker because Norman Withers has such low and , but he has plenty of combat options to help him deal with this weakness. Mind over Matter, "I've got a plan!", and Shrivelling can all potentially take down this monster with tests that are base +2 or base +3. That's really not bad. Of course, if it's multiplayer and Norman doesn't have any combat options in his deck for some reason, another investigator can easily dispatch this enemy for him.

I'm not sure what the non-replacement cards for Norman Withers will look like. I think that the other replacement card, Split the Angle, is situational at best. However, I think it is possible people may come back to use these replacement cards even after the main cards are released so that they can continue to use this relatively mild weakness.

ArkhamInvestigator · 277
Another difference - Vengeful Hound isn't a hunter, so evading it once is enough if you're at a location you don't need to return to. — TheNameWasTaken · 3 9/12/18
Do you think that might have been a misprint? Of all the cards not to be a hunter, you wouldn't expect it to be one with "hound" in the title. — sfarmstrong · 257 9/12/18
I hadn't thought about that, but it would make sense! As far as I can tell, the Hound and Jenny's replacement Sacrificial Beast are the only weakness enemies that aren't hunters (not counting campaign-specific things), and the Beast specifically spawns as far away from Jenny as possible and wants to remain far away, so the lack of hunter makes sense there. Might be worth dropping a line to FFG about that. — TheNameWasTaken · 3 9/12/18
I did get around to writing to FFG about this some time ago and just got a reply - the lack of Hunter on the hounds is intentional. — TheNameWasTaken · 3 10/9/18
Naturally, 'draw or reveal cards via player card effects' is significantly wider than the 'printed text box were blank' effect of Stubbon Detective, which does not affect any card effect other than the investigator cards themselves. — Cluny · 51 7/26/19
I notice the scanned card has "Prey - Norman Withers" while the Arkhamdb text has "Norman Withers only". Is the scan correct? Or has there been an official errata? — Vittek · 1 9/5/20
0

Another enemy signature weakness. Looking at the two elements, the effect and the discard condition, we get:

The effect: This thing attacks Norman keeps him from drawing or revealing cards, messing with, but not completely negating, Norman's special ability. This is not a terribly difficult enemy to kill, even for Norman. In a previous review, people pointed out that it's not a hunter, so, if Norman can Evade it (or someone else engages it and Evades for him, it stays in its starting location, which might effectively put it out of play. However, with it's Evade of 3 and Norman's of 1, this is not going to happen naturally. Mists of R'lyeh could do the trick, but combat seems a better option, since Norman is even up with the Hound, even during his opening round ((Norman is unique so far that he can draw his signature weakness first turn. It's not likely, but it's Arkham). As Norman gains XP, his damage-dealing options become too numerous to mention, but, at 0 XP he is very fragile until he gets set up. Knife seems to be his traditional solution to an early Hound. It's cheap and he can throw it, getting 2 up on his test and killing the Hound if he hits. Enchanted Blade is more expensive, but it's more or less 3 thrown knives with some extra utility. Sword Cane is very attractive, since it can be kept in hand for the Hound's appearance and might be his best shot for that Evade attempt. It will take twice as many attacks to finish it, which might strain Norman's luck if he can't boost his . It's possible to get a perfect storm of a bad opening hand + the Hound on top of the deck, but that's pushing "situational" a bit far.

The discard condition: As usual with enemy weaknesses, kill it.

All in all, this is a below average signature weakness, maybe even way below on Easy or Standard.

Box vs book The Hound is a pretty easy weakness, but Split the Angle seems to get used for icons more often than it is played, so the "box" set is better, although you can run both without too much trouble.

LivefromBenefitSt · 928
It isn't a hunter, so always evade if possible so it doesn't go back to your deck. Norman runs through his deck very quickly, so even as weak as the hound is you'd rather not see it twice or thrice. — suika · 8767 2/5/21
Sure, but Norman has less chance of Evading it "naturarlly" than Ursula does punching a rat. — LivefromBenefitSt · 928 2/5/21
But unless you're running Norman solo, it's probably better to let your allies evade it than to include blades or knives in your deck to fight at 4 fight, with enchanted blades 0 eating up 2 mystic slot. Better mystic solutions are the cane, mists and ethereal form, or a spectral razor. Without using a mystic 0 slot, there's mind over matter and disk, occultic invocation, or the disc of itzamna. — suika · 8767 2/5/21
I do mention getting your allies to deal with the darned thing, but I also want to consider cases where that isn't convenient or possible. Once Norman has some XP under his belt, the Hound gets increasingly weak. For example, Norman isn't particularly likely to be packing Mists of R'lyeh (0) because of his deckbuilding, but Mists (2)? Easy, and It makes the test 6 to 3, which is fairly certain on Satandard — LivefromBenefitSt · 928 2/5/21
Blast, hit post while editing. It's also worth remembering that Norman is the only investigator who might be dealing with his signature weakness on turn 1, action 1. It's not likely, but it's there. Mind over Matter won't help, because you'll have no clues. Occult Invocation could, but it will cost you half your remaining hand. He's not likely to use both his Arcane slots at XP 0 because having more than one spell is a luxury. I tend to think that Sword Cane + Guts + Unexpected Courage is a decent safety net, although you can still get caught oyut, but that's Arkham. — LivefromBenefitSt · 928 2/5/21
I think you confused Mind over Matter with I've got a Plan. Mind over Matter doesn't require clues. — suika · 8767 2/6/21
You are absolutely right. I always get those two mixed up during deck building. — LivefromBenefitSt · 928 2/6/21