Either place 1 clue (from the token bank) on your location, or discover 1 clue at your location. Remove Mysteries Remain from the game.

Anthony Devine
The Dirge of Reason #5. 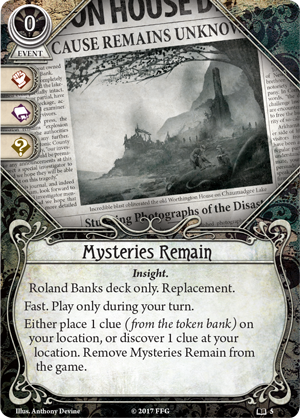 I feel like this card is significantly weaker than Roland's gun. However, the associated weakness seems easier to handle, so it might worth it.

Though this card is not bad, its existence could leads to problems.

The possibility of creating 1 clue out of nowhere means that the scenario no longer has a full control on the number of clues available. It could mess up with the timing of the scenario and leads to "bugs / unwanted shortcuts / ..." in fan scenarios, and force the official designers to take in account this card when creating scenarios.

The "remove from the game" save it, so as long as they do not print other cards with that effect, it should not be a problem. But still, when I read this card, I feel like this kind of effect should not exist.

Nothing too fancy, this is basically a free Working a Hunch with the added option of creating a clue out of thin air, which is a fairly unique ability for a card. It might allow you to avoid a hard-to-access location while still finishing the act. It could also turn back on Fieldwork or Inquiring Mind or any other card that requires a clue on a location. If you are a bad person, it could cancel a VP location for your team. Most interesting, maybe, is that it can serve as a safety net for Roland's "box" set signature weakness if you draw that late enough in the game that there are no locations with clues. This makes Roland the only investigator with a clear synergy between his "box" and "book" signature sets.

So, if you are risk averse, play the "book" set. If you aren't, consider playing both.

On edit, that should read "clear positive synergy." When one weakness helps you with another, that's amore.

LivefromBenefitSt · 888
I don't think it's right to say that Roland is the only investigator who had synergy between his original and replacement weaknesses. Dexter could use Molly to find Showmanship (if he doesn't have another Talent), Carolyn could use Hypnotic Therapy to heal Foolishness. There are probably others. — Zinjanthropus · 206 10/9/20
I said weaknesses, I meant signatures. oops — Zinjanthropus · 206 10/9/20
True, I should have said "signature weaknesses" and also clarified that I meant a positive synergy. Silas, Carolyn, and Dexter's weaknesses all make each other harder. — LivefromBenefitSt · 888 10/9/20
In the case of Mr Rook you might want to keep Roland's original sigs over his replacements for fear of drawing The Dirge of Reason over and over again! — mogwen · 250 10/11/20
1

Generally, I would rate this card a bit weaker than Roland's .38 Special (at least until you have enough XP to be toting a Lightning Gun with some Extra Ammunition). That said, this card has great synergy with Roland's ability as it's fairly common, even with careful planning, to end up needing to kill an enemy on a location with no clues. Since this is a fast action, it doesn't provoke attacks of opportunity and can simply be thrown down right before the finishing attack, and not waste a Roland ability trigger on a clue-less location.

It also is the only investigator card to date that allows a clue from the token bank to be added to the total - this can be significant if the investigators end up 1 clue away from success and would otherwise need to travel to another location to obtain the last clue. The flexibility of being able to alternatively simply discover a clue as an effectively upgraded version of Working a Hunch ensures it isn't a dead draw on scenarios where you need to remove clues from a location rather than accumulate total clues (a common occurrence in the Carcosa cycle).

As a cute bonus, as an Insight it can be copied by other investigators who are using Eidetic Memory, though because it removes itself from the game it will be very difficult to actually use it very many more times by this method.

When playing Roland in an 8-scenario campaign, I'd always choose this card paired with The Dirge of Reason over the standard cards. Alternatively, since both this card and The Dirge of Reason have synergy with Roland's .38 Special AND with Cover Up, playing all four at once is also probably viable if you can tolerate the slight increase in deck size. Cover up is much less threatening if you pair it with cards that place clues on your location, since the real issue with Cover up is not so much the actions required to gather the clues as it is the possible lack of clues to gather, or the fact that they might be in distant or inaccessible spots. See also Dr. William T. Maleson and Forewarned for other cards whose clue-dropping can help Roland get rid of Cover Up.