Dreams of the Deep
The Deep Gate

This skill's icons subtract from your skill value instead of adding to it.

Forced - If Dreams of the Deep is in your hand at the end of your turn: Reveal it and take 2 damage. 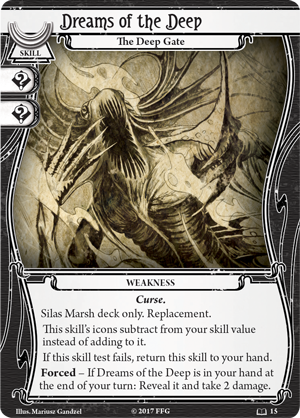 A fairly unusual skill weakness. Looking at the two elements, the effect and the discard condition, we get:

The effect: If you commit this to a test, you get -2 icons. If you can't discard it by the end of your turn, take 2 damage. Lather, rinse, repeat. A bit like, less annoying, and more manageable than Rex's Curse, this is a middling sort of signature weakness. possibly punishing if drawn at the wrong moment or because of an ill-timed but mostly handleable through overcommitting on a test, which Silas is kind of master of, especially on and tests, where he has good base stats. Cards that might help include Manual Dexterity (2), Defiance (2) (to kill those pesky special tokens), Stroke of Luck, and any amount of shenanigans to pass that crucial test. It's not like they won't be useful in other tests. Beware of last action draws, and you will likely be fine. Also beware of The Tower • XVI; that thing is like Kryptonite to Silas, and will probably cost you a turn to watch this thing go off anyway. I mean, Silas is a Man of the Sea, and he laughs at 2 damage at the end of his turn... once, twice, maybe three times, but, then it's into the Deep with him.

The discard condition: Pass a test with this card committed.

All in all, this is a below average signature weakness maybe as high as average at very low XP.

Box vs book It's paired with a signature asset that's pretty good, so it's up to personal preference whether you want to go with the "box," "book," or both signature sets.

LivefromBenefitSt · 937
note that you can use Dreams of the Deep to intentionally fail a test (for Take Heart, for example), though it will return to your hand. I expect there's some combo potential there with the Survivor fail-to-win suite. — Zinjanthropus · 213 10/8/20
0

Nothing stops you from committing Dreams of the Deep to another investigator's test (the same is true of Arrogance by the way, which is very useful to be aware of especially in the mythos phase), so even in rounds were Silas's stats don't shine it should be possible to get rid of this. There are almost always locations to investigate and there's generally going to be someone investigating them at a decent value. It can even be worth taking 2 damage to move to them (you'll take the damage in this case because Dreams triggers at the end of your turn, not the end of the round) to give them multiple attempts to clear it. In a roundabout way, it can be compared to a double-action discard weakness.

Flashlight (or Old Keyring) also works well if you can find a shroud 2- location (and is a solid option in general for any low-book investigator to contribute to the game), as that neutralizes the effect of the negative icons.

Also note that you don't have to commit it to any given skill test. If there's only a round or two left before the scenario ends anyway, it's very possible to just tank the damage.

When deciding whether to use box-or-book signatures, it's also worth noting that this weakness gets softer the more investigators there are, as there are more people to commit it to AND a greater chance of seeing an enemy the round after you draw it.

anaphysik · 83
It also gets easier to solve with more xp as you should have more skill bonuses — Django · 4428 3/4/22
Good point with committing to other investigator's tests; so....how would "your" be interpreted in this context? If the test fails, it returns to "your" (Silas's) hand, right? So wouldn't that also mean that it behaves like Unexpected Courage when committed to a test not using "your" (Silas's) skill value? — TheDoc37 · 462 1/21/23