Jeff Lee Johnson
Echoes of the Past #111. 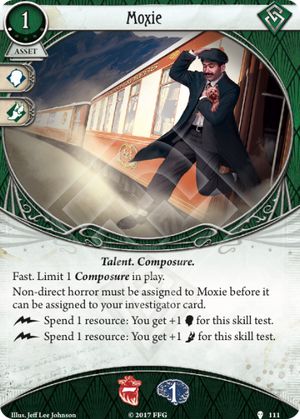 Moxie is probably my pick for #2 Composure behind Plucky. It in a faction that loves the pay-to-win mechanic, and it has stats that are generally very useful to those who can take it.

Overall a situational but effect tool for most investigators.

PureFlight · 623
Isn’t your review somewhat contradictory regarding Leo’s must pass speed tests and willl tests for Finn? I agree he won’t have Ressources for it as both deck options are very expensive. — Django · 3370 10/1/18
@Django I agree with the review actually, even though it contradicts itself. Will tests are far more likely to be fatal for gators, while agility tests are simply inconvenient. — SGPrometheus · 419 10/6/18
Boosting Willpower is the reason you mostly want this card as a rogue, and most willpower tests will come from treacheries. You might think that since this card is fast you can just wait till you draw a treachery whose test you absolutely cannot afford to lose, but that doesn't work. Keep in mind that fast assets, unlike fast events, can only be played on a player window during your turn. You must play Moxie early on to be sure you are prepared to face a nasty treachery but that exposes you to risk of losing the card. — Killbray · 54 6/30/19