While your current location is connected to at least 2 other locations, you get +1 and +1 .

While your current location is connected to at least 4 other locations, you get an additional +1 and +1 .

Dimitri Bielak
The Depths of Yoth #275. 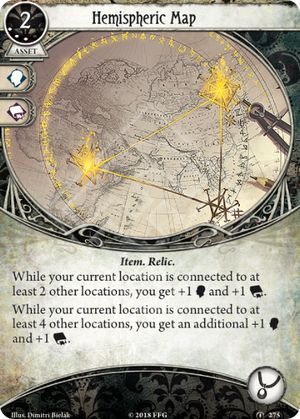 Neutral cards are few and far between, especially long lasting assets, so here's one Accessory option that boosts and regardless of class.

The card is very powerful in theory. For 2 resources a +1 to 2 skills is great (camera great, so you get your money's worth even if you just ignore the empowered bonus. And sitting somewhere connected to 2 locations actually seems like it should be easy.

Often enough locations aren't actually in play for the majority of a map, other locations being connected to them doesn't fill the bonus requirements. This makes Hemispheric Map rather terrible when locations are being hidden behind Agenda or Act advancements, which they routinely are. Furthermore many high density clue locations are bottlenecks, for example Attic and Cellar, Hemispheric Map is just blank at these places, they are far from rare! If you take this in The Night of the Zealot, the card is inoperable in The Gathering, it's active throughout nearly every location in The Midnight Masks, and again it's just Off in The Devourer Below.

So you pay 2 resources, 3 XP and an Accessory slot for an item that's largely offline.

If I start talking about the other campaigns, it's again a rather specific set of goods and bads:

TL:DR, steer clear unless you're familiar with the map and know about a few high intensity spots where it will be good, frankly speaking the only campaign I can guarantee that it's good in is Carcosa scenario 5+, where locations are routinely connected to 2 others or more.

I'm going to disagree with the other reviewers here and tout the effectiveness of Hemispheric Map.

A good comparison is St. Hubert's Key, a card which I run in anyone with greater than 2 who can take it. I actually think Hubert is a little too strong for a 0-level card, but it is held in check by a faction that is already laden with expensive assets.

For 3xp, you get a similar card that only costs 2 resources (MUCH better) but is conditional, so it's definitely worth a second look. I think it should be evaluated on the 2 location boost, with the 4-location boost being a nice perk to help get rid of Frozen in Fear.

I could run some numbers on how many locations in each scenario will activate its standard +1 +1 state. However, I think it's safe to say it will be at least half of the locations in the vast majority of maps. There will be exceptions (Museum, Essex, Echoes), but occasionally you'll get an exciting +2 +2 boost as a pleasant surprise (Masks, Curtain Call, Last King, City of Archives).

Ironically, this is just okay in explore-heavy Forgotten Age scenarios where you are trying to fill out the map, as you often put in a new location that is only attached to your previous one. But once you have to double-back the maps become really friendly to the map.

Overall, I've been loving this in Wendy and Solo Zoey, and I expect the same out of 3+ non- gators like Leo, Jenny, Minh (especially with Barricade[3]), Roland, Rex, and Ursula. Mystics have a variety of options they would take first like Holy Rosary, St. Hubert's Key, and Crystalline Elder Sign.

PureFlight · 623
In TCU, Union and Disillusion is quite friendly to this card. Also the standalone Rougarou, IIRC. It could be decent in an Ursula/Elli relic deck as you do want to give Elli as many grabs as possible. There's probably some kind of janky combo to be had with Luke and Dream-Gate, though I'm not sure what. — Zinjanthropus · 158 2/22/20
2

Clearly a very situational card, it's good in scenarios where you know there'll be a lot of locations in play and preferably from the get-go.

I think this card will really shine in The Blob That Ate Everything; as long as you're not at an outer location you'll get the +2 and +2 pretty much all the time.

I'd like to take two copies of it in a Mandy Thompson search deck with Dr. Elli Horowitz and maybe the oft-forgotten Relic Hunter just in case. Assuming you have enough other sources of search as well it should be found pretty quickly, and getting +4 and for a base of 7 and 9 on a lot of locations is pretty nuts.

I just want to highlight our good friend Luke, who has the following things going for him to make this work: 1) A secret box that brings him to places connected to every open location about three times a scenario, and 2) a pretty much uncontested accessory slot. So yeah, this card is about better than average with him.

I thought that this card was going to be pretty solid for people that can benefit from both of those stats. Certain investigators like Jim Culver, Marie Lambeau or even Wendy Adams to name a few. I'm giving it some more thought as to when you usually want the intellect bonus, the majority of the time it's on a dead-end where you will not be getting any help.

If you just need the than you're better off with Holy Rosary. And I'm not sure if taking it just for the is worth it alone.

Half of the time you'll be getting the bonus because most locations have two connected symbols to them, but the half of those locations seem to be the ones connecting to the locations you'll be getting close at in many scenarios. They're not the locations themselves where you will be picking up clues. I really wouldn't count on having the secondary benefit. It's an unlikely scenario but may eventually be a benefit in certain circumstances. I think overall it might not see play..