After Library Docent enters play, return a Tome asset you control to its owner's hand: Play a different Tome asset (by title) from your hand, reducing its cost by 2. 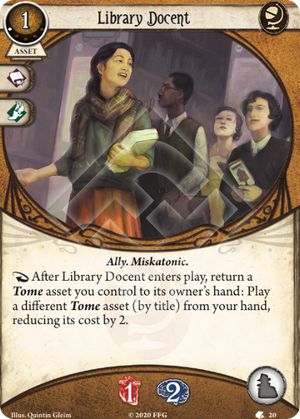 What tomes would benefit from being reloaded? Assuming you can take Seeker XP 1.

De Vermis Mysteriis -- likes being returned; get rid of that pesky Doom! (2)
Encyclopedia (0)
Esoteric Atlas -- both versions
Forbidden Tome -- if you somehow mess up and take the 5th secret without 10 cards in hand.
Grimm's Fairy Tales -- assuming you are Minh (or Rex).
Occult Lexicon
Old Book of Lore (3)
Otherworld Codex
Pnakotic Manuscripts
Scroll of Prophecies (0)
Scroll of Secrets -- All vesions, if you can take (1) for the upgrade.
The Necronomicon -- yes!

The King in Yellow is sadly immune to this card, but I am not sure if you could use it on either version of The Necronomicon and just live with a hand size of 7? I expect the riule of not being able to discard or remove Weaknesses other than by their card effects would hold sway.

LivefromBenefitSt · 928
You can't bounce The Necronomicon (weakness), but not for the reason you suggest. It can't leave play because of the card text on the card itself specifying it. However, if you have somehow managed to remove the 3 horror from it without it getting discarded by its ability, then it is completely legal to bounce it to your hand with Library Docent. However, I would not recommend it due to the weakness rules: "If a weakness enters an investigator's hand in a manner that did not involve drawing the card, that investigator must resolve the card (including any Revelation abilities) as if he or she had just drawn it." So it would immediately jump back into play with 3 fresh horror! — Death by Chocolate · 1230 9/8/20
OK, best not to mess with the Necronomicon on principle! — LivefromBenefitSt · 928 9/8/20
Could I return a Tome with the guide and not play another Tome because I don't have any that meet your condition? — tabernero87 · 34 2/6/21
Marie - Library Docent - De Vermis Mysteriis is an interesting combo to clear the doom before the agenda turns over. Moonlight Ritual works of course but having a Plan B is always a good idea. — TWWaterfalls · 850 4/30/21
@Tabernero87 Unfortunately not and that's a major downside of Library Docent. According to the rules you cannot trigger an ability if its effect doesn't have the potential to change the game state. The cost is not factored. If bringing a Tome back in hand was part of the effect and not a cost then you could trigger the ability just to take a tome back even if you couldn't play anything else, but unfortunately it's a cost. I just finished a game where I wanted to bring the Necronomicon (Dacia translation) back into my hand, I actually paid XP for Library Docent for that precise reason. But then I realized I couldn't activate the ability at all because I had not other book in hand. — Killbray · 5427 7/27/21
finally played with this one instead of loading up the Necronomicon with secrets and this is a great card - especially how harvey can cycle through his deck quickly. A couple of these and other cheap tomes to trigger them, and you can play the Necro 3 times in one deck play through — Krysmopompas · 297 8/26/22