Fast. Play after you defeat a Monster enemy.

Each investigator at your location heals horror equal to that enemy's horror value.

The creature’s corpse lays motionless at your feet.
It’s a small comfort, but you’ll take it.
Ethan Patrick Harris
Undimensioned and Unseen #225. 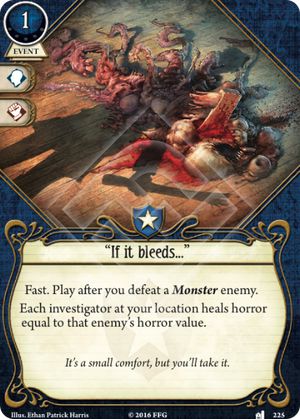 This is a card clearly designed to help low sanity guardians (Zoey and Roland) survive their romp through the horrors of Arkham. The added bonus of healing your friends is just icing on an already delicious cake and fits with the guardian theme of leading from the front.

How is "If it's bleed..." compared to other sanity restoring cards? First Aid takes 4 actions to heal 3 Horror for 2 resources, but can also heal Stamina damage. Moment of Respite (sort of the opposite to this card) restores 3 sanity and a card, but costs both Xp, 3 resoruces and an action. Smoking Pipe restores up to 3 Sanity, but at the cost of stamina and one action.

This card is superior, I'd say, as long as you kill 2 horror value monsters. Which I bet you do twice, before breakfast. =)

Rita was awed by the psychologist’s flat affect. It has been kind of upsetting, that Peter would hang out with her instead of a fellow Squid, but she could understand it now.

Joe Diamond, no stranger to these types of cases, ducked behind the couch. Sure, it all started as “stick to the plan”…But he saw those red sticks peeking out of Carolyn’s purse.

The explosion was a hell of an answer. Whatever ghoul the circle had dreamt up was now decorating the parlor.

As Diana emerged, her robe slightly singed, Dr. Fern lectured the group on witchcraft and its role in protofeminist gatherings.

Everyone felt better that they weren’t her.

Not a fan, has too many things going against it.

If you can/own the cards, you're probably better off playing Book of Psalms, Hallowed Mirror, or Medical Student
Out of faction, you can try Logical Reasoning, or Fearless

fates · 33
Maybe one plus because I've been trying to fit this card many times, is that it doesn't eat one of your most precious slot, when your example take the Hand, Accessory or Ally slot. To me Inspiring Presence is also a contender, helps with a test, heals 1 horror from your Beat Cop in case of success. — Valentin1331 · 25205 5/2/22
Your beat cop is an ally and no investigator so he doesn't benefit from the healing. But you can heal other investigators. — Tharzax · 1 5/2/22
It does heal horror from all investigators at that location, so it has a high ceiling, but I agree that you're very unlikely to heal 8 horror at once (but you get an Arkham Achievement if you do!) — Hylianpuffball · 22 5/2/22