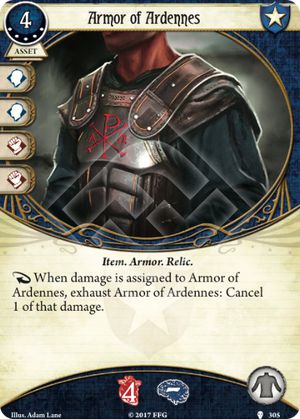 We FINALLY have an investigator who wants this card.

Everyone say hello to Sister Mary, our friendly neighbourhood 5 health Guardian! Slam one of these bad boys down, and between your Armor of Ardennes, your whopping 9 Sanity, and whatever other allies or accessories you have, you are not dying any time soon that's for sure.

Soloclue · 2349
Or for the same XP you could buy 2x Brother Xavier and Bulletproof Vest, also True Grit is 0 XP, so... — SergSel · 272 5/1/20
@SergSel None of those cards singlehandedly offer the kind of damage soak you get here or come close to the economy. Even if they did, it's exciting to finally have a character who can reasonably kill monsters that wants and can use this. — SGPrometheus · 664 5/1/20
And then add Well Prepared for the double icon boost. This card still only makes sense in high XP campaigns but I think it can work for Sister Mary. — TWWaterfalls · 848 5/3/20
it makes sense flavorwise as well, because of the Christian motif on the armor. — PowLee · 13 5/3/20
I've yet to run it, but I've been wondering if Solemn Vow might raise the value of this card a bit (or perhaps a future down-leveled version, if it retains the reaction) — DigitalAgeHermit · 17 6/13/20
Solemn Vow just moves damage, it doesn’t ‘assign it’ (a specific step when taking damage), so solemn vow doesn’t really combo with it. — Death by Chocolate · 1203 6/19/20
So much for that then, I suppose. Guess that means this card is just as bad as everybody seems to have figured :). Thanks for the clarification — DigitalAgeHermit · 17 6/24/20
I think, this might be still good with the nun, if she takes "Blood Eclipse". She can also get the level 3 version quite cheap, if she takes "Arcane Research", and she is quite high in willpower. Both would be probably late campaign upgrades for her, though. She could use her research for free spell upgrades like "Rite of Seeking" or "Ward of Protection" first, then go for armor and flagellation. — Susumu · 221 9/13/20
I think the only problem is if you want to run Blessed Blade or the bag-infusing Book of Psalms with a bigger weapon, Sister Mary loves a Bandolier (2) - one of these days maybe we'll get a body equivalent to Charisma and Relic Hunter, but I doubt it... — Krysmopompas · 290 1/3/21
I mean, if you think a "whopping" 9 Sanity is enough, then 4 extra Health is all you need for Mary to reach the same value and that's what the much cheaper Bulletproof Vest can offer. Which might actually become +8 health if you really need it since you'll want to have 2 copies. Not to mention the fact that Mary has already 3 soaks available from her signature. So even for Mary this armor is still way overkill for what she needs and you can hardly justify the 10 XP for getting 2 copies. — Killbray · 4745 7/24/21
4

It's almost pure insult how much better Jessica Hyde, a level 1 survivor card, is than this level 5 guardian armor. It has some niche bonuses:

However these niche bonuses do not make up for:

The fact that you can purchase 2x Jessica Hyde + Charisma for the same cost as one copy of this card costs suggests something went very wrong in writing the balance for these two cards.

Difrakt · 1146
The only other advantage to this card is that it's a relic so can be placed on Elli Horowitz. That's not a hugely big deal of course, and doesn't affect many of the investigators who can take it. Truth to tell I tend to forget this card even exists. — Sassenach · 166 1/18/20
How about Jessica and 2x this in play, one on Elli? — Django · 4246 1/18/20
If you mean for Tommy, wich is the only investigator who can access both of them, then I agree with you, but I still prefer to use the ally slot for the Beat cop or the Guardian dog to maximize the damage dealt to enemys. — Fenrirgarm · 5 1/18/20
At the end of the day very few are upgrading to Armor of Ardennes and many Survivors will want this. One difference not covered is that they come from different classes and things are not equal between classes. Jessica Hyde is essentially a new Peter Sylvestre. He is one of the strongest allies in the game and so is Jessica. The ironic thing is that most of the investigators that want the combat bonus don't need the infinity damage soak as much. Jessica and Peter could make for an interesting combo though with someone. Infinity soak. I doubt that I would upgrade to Armor of Ardennes though. — TWWaterfalls · 848 1/18/20
Yeah, the armor is way undertuned. It's just unfortunate that the big splashy Guardian XP card from the Carcosa cycle is almost unplayable. It doesn't even work well with Mark's ability! — CaiusDrewart · 2745 1/21/20
3

A headscratcher of a card. Most Guardians will be defeated by horror, not damage. This card will make you all but immune to damage effects.

Sadly, at the moment it seems too expensive (both resource and xp) to be worthwhile. I can see its merit in Mark Harrigan, who wants to preserve his health as much as possible for his triggers and to avoid his weakness... but even then.

Also it has a cute interaction with smoking pipe.

But still, really ask yourself is this better than a lightning gun? I would say 9/10 the answer is a solid no.

I hope there is some way of reducing this cards xp cost or they release a leveled down version at some point, because I have a feeling this won't see all that much play until then.

Myriad · 1143
I also don't see the point of this card. It's incredibly expensive and it's only available to Guardians, i.e., the class that already has massive health reserves and also has major economy problems. Why bother combining this with Smoking Pipe when you could just buy Moment of Respite or Elder Sign Amulet for fewer XP? — CaiusDrewart · 2745 3/27/18
It's particularly disappointing because Peter Sylvester has a similarly powerful effect against sanity damage, and offers other benefits--and he's a level 0 card! I think the designers were way off on this one. — CaiusDrewart · 2745 3/27/18
Trying to imagine how this could be good in a Guardian deck, I can think of two scenarios: 1) As a Guardian, it can allow you to be totally reckless and take actions while engaged with enemies without worrying about Attacks of Opportunity, but only 1/turn. Probably best for that in solo play. 2) If you're running Teamwork, it's crazy good to give to your squishies. Hand it to Daisy/Rex and watch them investigate with nary a care. Other than that, yeah, kinda pointless on Guardian. — SGPrometheus · 664 3/27/18
Of note, you cannot use this with smoking pipe. Canceling the cost cancels the effect; the cost isn't paid, so you don't get the effect. — CecilAlucardX · 10 3/28/18
@cecilalucardX: Are you sure that's correct? You're still assigning the damage to the armor, which seems to satisfy the "take 1 damage" portion of the cost, and in any case, you're still exhausting the asset and spending the charge. Can you point to the FAQ or ruling that governs this? — SGPrometheus · 664 3/29/18
I can see no reason why this wouldn't work with Smoking Pipe. The cost is paid, damaging the armor, then you exhaust it cancelling 1 damage, so the effect it's preventing from initiating is damaging the armor, not healing the horror. I think!! — bern1106 · 2 3/29/18
What it really comes down to is the definition of "Take": If "Take" means "Assign", then yes, for the purposes of the cost, this is checked during Step 1 of Damage. If "Take" means "Dealt", then per Step 2, "If no damage/horror is applied in this step, no damage/horror has been successfully dealt." and since no damage has been "Dealt", the cost is not considered paid. So now we need a proper definition of "Take" versus "Dealt", "Assigned", "Applied" etc. — CecilAlucardX · 10 4/6/18
Additionally, under Health and Damage: "Any time a card TAKES damage, place a number of damage tokens equal to the amount of damage just taken on the card (see "Dealing Damage/Horror" on page 7)." If you are not putting tokens on the card, due to cancellation, are you still considered to be "Taking"? — CecilAlucardX · 10 4/6/18
Personally, for thematic reason, I don't think Armor of Ardennes should interact with Smoking Pipe. You smoke the pipe, the body get weakened, not the armor. — brightknight_216 · 33 4/21/18
Smoking Pipe combo is useless on Mark. You want that 1 damage on you true grit/etc. to draw a card with his innate. — Xulez · 129 4/22/18
Actually, per Matthew Newman: "If the cost of a card cannot be paid or is canceled, the cost has not been successfully paid, thus its effects do not resolve. For example, if you use Armor of Ardennes to cancel the damage that is part of a card's cost, the damage has not been successfully dealt (or taken), and therefore the cost has not been paid." So it looks like taken also means dealt, which ties to the step 2 post above. — CecilAlucardX · 10 4/24/18
I agree that Guardians in general don't need it, but it's really good on Mark Harrigan. The only problem is it competes with Bandolier, as both of these cards occupy the same slot and Mark would want it as he wants a Shotgun equipped at some point. — matt88 · 2606 5/9/18
Mark can't use it well,because assign damage is earlier than place the damage. — wjqcx512 · 7 5/24/18
It's really sad that it doesn't combo with the pipe; it would actually be usable then. On a totally unrelated note, the symbol on the armor is the same as the symbol on the guy's hood on Fearless. How odd. — SGPrometheus · 664 5/31/18
@SGPrometheus: That symbol looks like the Chi-Rho, an ancient symbol of Christianity. — CaiusDrewart · 2745 6/21/18
i bought this card somewhere during the end of the carcosa campaign with zoey and never regretted it (4 physical trauma sure is a lot). I think that the armor of ardennes is a late-game card. It has been great so far in miigating the traumas. I am pondering whether i should post this deck or not as i am running out of ideas what to buy next. (50+ XP) — RaahqMcMupfel · 1 7/24/18
Armor of Ardennes is a fine synergy with Well-Prepared to provide both Willpower bonuses to resist Treacheries and combat bonuses with one-handed weapons that do not carry the necessary double-icons themselves. — Cluny · 50 8/11/19
Additionally: Since Armor of Ardennes is a relic, it synergises with Dr. Elli Horowitz - you can take advantage of it without even occupying your body asset-slot. This option is available to Zoey and Roland. — Cluny · 50 8/11/19
1

This card is essential for one thing, and that's if you're going for an "indestructible" build. Where you're playing a , let's say Mark Harrigan because it works best on him, (though Tommy Muldoon might find himself slightly interested in this as well, possibly Zoey Samaras since she tends to take aggressive cards like Taunt and On the Hunt) and you're near 49 exp: You're just to the nines with Kerosene, Brother Xavier, Enchanted Blade, maybe First Aid, and what have you, alongside all the EXP horror/damage mitigation you took at EXP 0 (Hallowed Mirror, Dodge, Emergency Aid, Second Wind, The Home Front) which you can use to utilize Sophie consistently whenever you need her. Maybe, if you're freaky, you're running cards like Blood Eclipse. It's really unclear to me if that sort of build is optimal, but it doesn't feel bad.

LordHamshire · 27
It seems to me that running all those other expensive tank cards would make Armor of Ardennes rather redundant and less valuable for its XP cost, not better. — CaiusDrewart · 2745 9/16/19
1

Armor of Ardennes gives you much soke ... it's okay. But not 5 XP okay.

"[Reaction] When damage is assigned to a card you controll, exhaust Armor of Ardennes: Cancel 1 of that damage."

"[Reaction] When damage is assigned to a card under the controll of an investigator at your location, exhaust Armor of Ardennes: Cancel 1 of that damage."

That would be a real protection build.