Attach to your location or to a connecting location.

During the enemy phase, each enemy that moves does so along the shortest path toward the attached location, instead of to where it would normally move.

Forced - While attached, at the end of the round: Discard Lure.

Sebastian Rodriquez
Before the Black Throne #323. 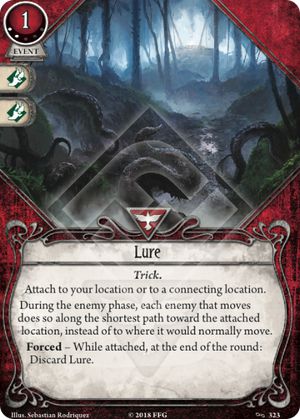 Lure is part of a suite of Survivor cards that attach to locations and affect enemies at that location.

Hiding Spot, a level 0 card, makes non-Elite enemies at that location aloof. Hiding Spot can be used reactively to prevent Hunter enemies attacking you or proactively to make sure that any non-Elite non-Massive enemy that spawns at your location doesn't engage you. It's Fast, which makes it a highly efficient card.

Snare Trap, a level 2 card, can be used to exhaust a non-Elite enemy that enters your location and prevent it from straightening in the next round, which includes spawning at that location.

Lure (1) and Lure (2) control enemy movement during the enemy phase. Unlike Snare Trap and Hiding Spot, there is nothing preventing them from affecting Elite enemies. This is very powerful in scenarios with Massive Elite Hunters, particularly The Devourer Below. Lure (1), however, always had the problem that you could only use it at your own location, which made it difficult to use. Lure (2) , however, can be dropped at a connecting location, which makes it a lot more playable. If nothing else, you can always put it in a Hunter's location so that the Hunter will stay where it is.

So, what the upsides and downsides of the card? Well, one downside is that the card only lasts for one round. Hiding Spot and Snare Trap can be dropped in a space you intend to spend a long time at, and will protect you until needed - that is until an enemy spawns or moves into your location. They also protect you from enemy movement during the Mythos phase, which neither version of Lure has any effect on. It won't, in other words, affect an enemy like The Experiment.

An upside, one quite relevant to The Circle Undone, is that Lure (2) will protect you from Aloof Hunters such as Whippoorwills and the Nether Mist.

A final upside is that by playing it you can cluster multiple Hunter enemies in one location, allowing you to set up a future area attack or area evade.

So what investigators are best suited to play it? Well, Wendy Adams can play it every turn if she gets her Amulet out provided she avoids discarding or playing any Event cards in the Mythos Phase, The timing of the end of round discard from play makes it unlikely to be removed from the game by Abandoned and Alone. Hiding Spot can also be played indefinitely, but playing it in successive turns is often not much help. William Yorick can use it to set up Dynamite Blast, and Agnes Baker can similarly combo it with Storm of Spirits. Any character who can play this card can play Survival Instinct, Cunning Distraction and Impromptu Barrier. There is currently no Investigator who can take it and the Mk 1 Grenades or the Rogue version of the .45 Thompson.

So what does the future hold for this card? Well, cards that appear late in one cycle are often hints for what's coming in the next cycle, and the design of Luke Robinson, as well as this card and Bait and Switch (3), all suggest that dealing with enemies at connecting locations might be a serious consideration in The Dream Eaters.

This card really pulls its weight in Innsmouth. With so many hunter monsters in most scenarios, and damage or horror hits on engagement with a lot of them, this can shepherd those suckers away from players with good regularity.

Didn't get to try it in "Horror in High Gear" yet; sending pursuing cars the Long Way Around while you're scooting directly to the Lighthouse is a pretty hilarious image.