Name a Spell card. Search your deck for 1 copy of the named card and draw it. Shuffle your deck. 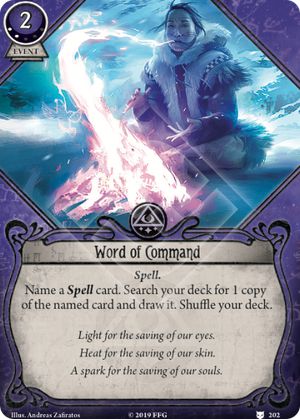 A simple card, with a very clear use, but at the same time, just expensive enough to give a burgeoning mystic pause. There are tons of cards in the game that let you search your deck for various kinds of cards; but I think it makes the most sense to compare this to a more particular group: cards that let you search the WHOLE deck for something.

Cards that let you search your whole deck for something:

Level 5 No Stone Unturned: The ultimate gimme what I WANT card. It costs two resources, same as Word of Command, but let's you choose anything at all in your deck -- or you can give that power to another investigator at your location. And it's fast. But you'll have to pay an extra three xp for those benefits.

Research Librarian: This card is interesting to stack up against Word of Command. Both let you search your deck for a card of a particular type (tome, spell) in exchange for 2 resources and an action. The Librarian also throws in a rickety ally for free, which can be a blessing or a curse. If you don't have an ally out, sure, why not. If you do, you probably don't want to trade them for this dusty ol' duffer. I'm a little surprised, though, to see such a similar card cost an additional 2xp. But considering how many mystics build their decks around getting out VERY particular spells like Shrivelling or Rite of Seeking, it probably makes sense to force them to pay more. Still, if you are running Pnakotic Manuscripts as a seeker, the Research Librarian is a hilariously good deal. To me at any rate, he makes Word of Command seem a bit overpriced by contrast.

Stick to the Plan: Really an amazing card... allowing you to start the game (essentially) with THREE extra cards, and those three cards handpicked by you! They have to be tactic or supply events, but there are some good'uns out there, like Custom Ammunition or Dynamite Blast. Word of Command has the slight advantage of allowing you to choose your card the depending on the game state when you play it, but I honestly don't think most people will take Word of Command for that versatility. They'll take it because they want to make sure they get their level-five Shrivelling, and they'd rather pay 2 xp for a search card than another 5xp for the card itself (or they've already maxed out two copies). Again, I'm forced to conclude that Word of Command is a bit overpriced in comparison.

Anna Kaslow: Kind of a niche card -- you have to be running lots of tarots to make her work. But if you are, she's great. She lets you find and immediately play a 3-resource asset for, well, three resources. And she has other benefits beside. Good action and resource economy for a search card, but pricey at 4xp.

Overall, I think Matt has been a bit stingy with this Word of Command, but probably because he knows plenty of mystics are desperate enough for more reliable draws to pay his price. Decks that heavily rely on a couple key spells will benefit from this card, but I think that most of the time, the better strategy will be to create a deck that works with a variety of draw sequences. Mystics who have built more versatile decks can use the 0xp Arcane Initiate instead, and potentially get multiple draws out of it.

One note: if you do plan to upgrade into a couple copies of this card reasonably soon, it may be a good idea to start your deck with a single copy of Astounding Revelation. You're guaranteed to be Astounded whenever you play Word of Command, assuming you haven't already unluckily drawn the Revelation.

Final take from this vacillating and indecisive reviewer. The card definitely has a clear and powerful effect, but it's expensive and feels a bit like a crutch for an overly rigid deck.

Mordenlordgrandison · 390
This also has synergy with Dayana Esperance. It lets you go digging for that Deny Existence or Ward of Protection to attach to her. — Sassenach · 168 3/5/20
Ooh, I like that... I've been wanting to run a Dayana with an epic level-5 Deny. Would definitely pay an additional action and 2 resources to set that up. — Mordenlordgrandison · 390 3/5/20
Parallel Agnes doesn't seems like she'd dig this. Her ability makes it free and shuffles it back into her deck afterwards. I do wish there was a levelled up version that made it fast. — greenmantis55 · 47 10/24/22
*Parallel Agnes DOES seem like she would dig this. — greenmantis55 · 47 10/24/22