Guided by the Unseen

Alexandre Honoré
A Light in the Fog #223. 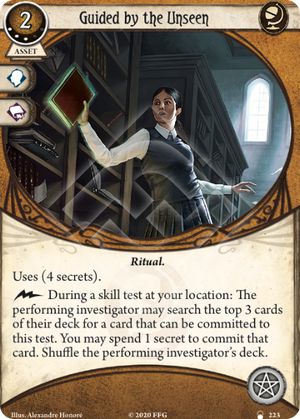 I'm not sure how this card made it through playtesting, but Mandy in particular would love this card. Since there is no limit to how many times it can be activated (and you don't even need to use any secrets), she can easily fish out her weakness along with all the research cards in her deck before moving on past the player window to finish the skill test. If it was a particularly difficult/important test (or if she felt like it), she could even fish out all Three Aces at the cost of 3 of the secrets.

I anticipate errata for this card coming very soon.

Note: I say easily, but it'll be very time consuming at only 3 cards at a time. The rest of the players will not be happy as they wait for the performing investigator to go through all the necessary searches until they are satisfied they've found everything that needs to be found in their deck.

So this is one action to play, 2 resources for 4 card commits over 4+ tests.

It seems somewhat comparable to something like. Hyperawareness or Arcane Studies.

Talents
-cost 1 exp more.
-only for 2 skills.
+are unlimited use (but only 2 icons per turn).
+guaranteed to work.
+have a side benefit of letting you spend your resources.

If it's for items, you also have survivors also have Jury-Rig which also boosts by 2 three times at 0 cost and 0 exp.

It might be ok as a late game addition once you have your high exp skill cards (or at least cards with high number of icons). Maybe a case can be made for survivor seekers that want to search for valuable cards like The Necronomicon, commiting it to a test then getting it back from the discard with recursion.

Seems a bit similar to Astronomical Atlas which is better since it's unlimited use and lets you draw the commited card but that costs 1 more and uses a hand slot.

Has obvious synergy with Mandy Thompson and Minh Thi Phan. Possibly good for Amanda Sharpe since she runs lots of icons/skills as well.

Cons.
-2 cost.
-have to draw it then spend an action to play it.
-sometimes fails to draw.
-only 4 uses instead of 5 (good exchange for half the exp).

If possible I'd go for ancestral Knowledge first. The Permanent trait is just too good, you always get it every scenario so it's like a free draw at the start. (Studious alone costs 3 exp).

fates · 18
You can also support other investigators at your location with this card. — Tharzax · 1 4/21/22
It cannot be overlooked that the once per test use means the odds of ever drawing your research cards plummit once this card is in play. — Death by Chocolate · 1164 4/23/22