Reduce the cost to play The Stygian Eye by 1 for each token in the chaos bag.

Until the end of the round, you get +3 to each of your skills. 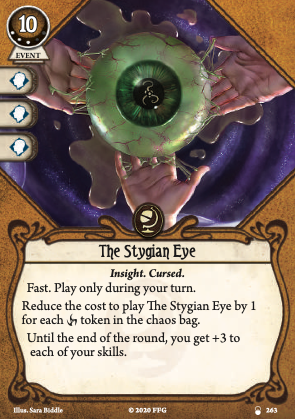 The Stygian Eye is super cool thematically (I'm really liking all the Greek mythology stuff Seekers are rocking lately), so I'm eager to make it work. But this card asks a lot of you, and I'm not sure it gives all that much in return.

You really have to be all-in on Curses to make this worth 3 XP. To be honest, I think that even if you are all-in on Curses, this effect is not necessarily a hugely rewarding payoff. If you'll indulge me in a cross-faction comparison, look at Trial by Fire and Will to Survive. I think you have to try to get The Stygian Eye down to 3 resources or lower for it to even start seeming playable at its XP cost. That's an awful lot of Curses! At 0 resources it's getting strong, but even then it doesn't strike me as crazily strong, not for 3 XP.

If this were a more permanent bonus, it could really be the centerpiece of a deck. As is, I think that one really strong turn is not enough of a payoff to justify throwing a lot of Curse generation into your deck. (The recursion options like De Vermis Mysteriis and Eidetic Memory are worth keeping an eye on, but each only offers one additional use.) So, I think you are probably going to want other, stronger payoffs for your Curses, and put this in additionally.

I suppose that a hypothetical Seeker/Rogue might be the best home for this, as Rogues have additional ways to get Curses into the bag, and also have a lot of ways to generate extra actions which obviously works well with this round-long buff. Even outside of Rogue, there are various ways to take an extra skill test or two on your turn (Ursula + Pathfinder, Summoned Hound, Cryptographic Cipher, and so on). None of these proposed synergies are all that exciting to me, but they're worth keeping in mind if you decide to go for this.

My guess is that, despite the cool artwork and the sweet Greek mythology reference, this card will ultimately be too underpowered to see much play outside of theme decks. But we'll see. Maybe the extra-action and/or recursion synergies eventually get there.

CaiusDrewart · 2597
I think this card looks like a bomb, but usually you'll play it for like 7 resources and just investigate three times. Seekers have enough economy that I think 30-50% price reduction is enough, and that's not too many curses. — SGPrometheus · 604 4/7/21
I don't think 1 card and 5-7 resources for +3 to a turn's worth of tests is good for 3 XP. If you have that much resource generation you have plenty of much stronger options like Taboo'd Higher Education or Hyperawareness IV. — CaiusDrewart · 2597 4/7/21
Yeah the XP cost is way more an issue for me as well. +3 for a turn? This is kind of like a more flexible, way more expensive Trial by Fire or Fight or Flight. — StyxTBeuford · 12621 4/7/21