As an additional cost to play Summoned Hound, you must search your bonded cards for 1 copy of Unbound Beast and shuffle it into your deck.

Matthew Cowdery
Where the Gods Dwell #282. 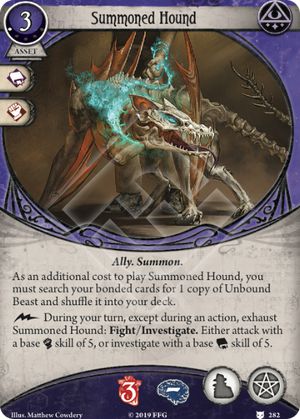 A NOT-VERY-SHORT GUIDE TO GOOD AND EVIL DOGGOS

So, I have put a LOT of thought into this card, and run a lot of tests. I loved the idea of bending the monsters of the Mythos to your will and the pursuit of good, a la Bind Monster from the original Arkham Horror game. I've found that the free actions and boosted stats are extremely useful and reliable, even in time-pressed scenarios. As it stands, I think there are two main paths to maximizing your Summoned Hound profit, with a few other possible tactics in the background. The first is to avoid the bad dog entirely, thus negating almost the entire downside of such a powerful card (unfortunately, there is no real way to mitigate the taxing ally-and-arcane-slot cost beyond getting more of those slots). The second is to use other Mystic tech to avoid actually facing the card.

Now, I'd like to go through each class and showcase what they can do with this card.

First off, Survivors, which currently means Patrice Hathaway or Agnes Baker. They fall into the never-Beast category, using Flare and A Chance Encounter to put the evil doggo into play without the corresponding weakness. They also have access to skills like Stunning Blow and Resourceful to get more value out of their dog actions, and ways to ensure even higher-difficulty investigations or fights can be accomplished without you spending an action. Just sit back and let that random stray...dog?...you picked up in an alley rip out the throats of your enemies and snuffle out clues! Plus, if you are Patrice, you can use Quick Learner to make your dog actions even more effective, as long as you trigger them late in your turn.

Secondly, Guardians, so Diana Stanley or Carolyn Fern. They really get to bring out the most violence from their investigator's-best-friends, with Vicious Blow and Inspiring Presence making their fighting more effective. Diana is the clear winner, though, because her Dark Insight literally starts in her hand and can reshuffle Unbound Beast if you ever draw it. This makes her one of the best options for the bad dog mitigation strategy.

Third, Seekers, meaning Daisy Walker (or technically Norman Withers, but he doesn't get high-level Seeker assets and his personal ability means it's basically impossible to mitigate the bad dog). Daisy already has 5 Intellect, but her Fight is pitiful and extra actions are always good, so don't rule out the good boys just yet. Seekers have access to exactly one shenanigan: Markings of Isis. This avoids putting in the bad dog, but is also something of a mediocre card, and unless you have an extra Arcane Slot will have to be discarded when you drop your second Hound (although since it only has 3 charges that's probably no great loss at that point).

The last class on this list is Rogue, so Sefina Rousseau or Dexter Drake. They don't have any way to avoid adding the bad dog to their deck, but they do have Think on Your Feet and Elusive to get the hell out of there once it arrives, and plenty of skills to do weird doggo shenanigans with. Dexter Drake can also easily discard the dog with his personal ability if he knows it's coming. How would he know, you might ask? Well, let me tell you in the next section!

Now, the Mystics have some tricks up their own sleeves for the purpose of mitigating doggo disasters, or improving your dog actions. Alyssa Graham can check your topdeck every turn for the bad dog, and then add a Doom to put it away (or if you really can't afford that Doom, use something else to shuffle your deck or get rid of the good dog ASAP. If you're ok with (what is currently) playtest material, Ikiaq (from an Arkham Nights Card Council) can hold off the weakness for a little while while you figure out how else you're gonna deal with it. Both of these, though, require an extra Ally Slot if you want to run them alongside a dog, and since I personally recommend a copy of Charisma so you can have two good boys at once, that can be taxing. Similarly, Empower Self and its siblings can be quite strong for boosting you to 7 on dog tests, but they require an additional Arcane Slot.

Well, I hope that this review of options has made some folks seriously consider the fun of summoning monsters to your aid. I recommend Survivor, Guardian, or Seeker access (in that order of priority) so you can maximize benefits and minimize costs associated with the Hounds. In my games, I found them to be extremely action-efficient, a lot of fun, and an interesting deckbuilding direction that offers you a little bit of a different angle from your standard Mystic tricks. Plus, the roleplaying and jokes they provide are really cool!

They do need some exercise, so be sure to take your new pets out on the town for a bit of...sport.

HereticPriest · 161
I once tried the dog in a combat focused Diana and used Scrying on my own deck, but found the deck too inconsistent to work well (it took too long to get combat boosts and weapons in hand and then into play).). — Django · 2661 5/7/20
I haven't tried using this card with Luke Robinson yet, but I think this card would probably be good for him because it would provide him a good combat option. He can also escape the unbound beast by going into the Dream Gate. A Luke Robinson with Charisma and Alyssa Graham should rarely have to fear the unbound beast as long as the Gate Box has at least one charge on it. Doing most of your card drawing in the Dream Gate can also help to mitigate the unbound beast since monsters cannot spawn there. Because of all that, I feel he probably has the best shot of making the Summoned Hound work well. — ArkhamInvestigator · 212 5/7/20
Hmmm, despite running Luke for my most recent campaign, he didn't occur to me for Hound purposes. I would agree that, of the investigators that have no way to avoid Unbound Beast entirely, Luke is a strong contender. Unfortunately, he can't be in the Dream Gate during Upkeep unless you're willing to spend a charge every turn after the investigator phase (which is not a terrible strategy, but will cause you to run out sooner or later, even with Charge support). I think overall he could be a really strong representative for the doggos, but I would still say Diana and Agnes are better Mystic option. Agnes is the one I use most frequently for a doggo deck and I have found her to be EXTREMELY efficient and reliable. — HereticPriest · 161 5/7/20
Seeker provides so much card draw, so you get a lot of cards without looking at them first. Or you'd lose a lot of seeker potential if oyu don't use such cards. — Django · 2661 5/8/20
There are some notable weaknesses for the Mystic recommendations. The main issue with Alyssa is that that takes up an ally slot to grant +Int stat, which is less than ideal unless you're using the dogs to investigate all the time - and even then, you're restricted to a slow trickle of clues. Similar slot issues occur when using two Hounds or a Hound and Empower Self - the dogs or the empowers require one slot each, and Mystics generally need those arcane slots to do anything substantial. You're committing a lot of resources for a once-per-round single damage or single investigate, and though it's a bonus action, you're locking yourself out of doing anything notable with your primary actions. Two dog actions and three less useful actions doesn't seem likely to surpass a round with access to Shriveling and Rite of Seeking, never mind their higher level versions. — Ruduen · 317 5/10/20
Might be worth considering Sacrifice to kill off the dog if you know (through Scrying or Alyssa or whatever) that the Beast is coming. That way you wouldn't have to worry about adding Doom or reshuffling your deck for whatever reason. Though I suppose you could also just use Sacrifice to kill of Alyssa after she bottomdecked the Beast. — Zinjanthropus · 20 6/30/20
5

Just think of this: Using this from your discard pile, with chance encounter (2xp). Because this is not playing this, so you can have this ally out without its greatest weakness.

As you get a free action every turn, it is basically on par with Leo de Luca (pros: skill boost+cheaper, cons: only fight/investigate, 2 card combo/weakness).

vidinufi · 33
Flare also works. Patrice could take both and find the hound consistently, and unlike most people who can take this card she would actually run the relevant icons to make use of the extra action. — StyxTBeuford · 1502 1/9/20
The free action every round at a boosted level is really strong imo. I think the free investigate action is stronger since there isn't a damage boost but for a combat focused Mystic that needs to deal an odd point of damage then it could save a charge on Shrivelling. I think this card will be great for anyone that puts a few static Int/Com boost into play and that has some capacity to deal with the weakness. — TWWaterfalls · 473 2/20/20
somebody elsewhere pointed out that you could put this into play with Markings of Isis, not that that's an amazing card outside of a few edge cases — Zinjanthropus · 20 3/7/20
4

I've been looking at this card for a while now cause the free action looks strong, but i think FFG overdid it with the costs and risks involved, mainly these:

Django · 2661
Patrice has the icons to use it well and can take A Chance Encounter 2 as a way to put it into play and skip the weakness. — StyxTBeuford · 1502 3/11/20
You can either use cards like A Chance Encounter (2) to put the ally into play and bypass shuffling the weakness into your deck, or you can use cards like Alyssa (and/or Scroll of Secrets, lol...) to try to prevent yourself from ever drawing the weakness. If you're Diana, you can cancel the Unbound Beast with Dark Insight. A free action almost every round is very strong, so this card definitely takes some thought to put in your deck. I agree with you though that I don't know whether the extra work to put this card into your deck is worth the effort, though, but it'd be interesting to try. — iceysnowman · 131 3/11/20
The hound isn’t unique so you can have more in play, even over several players. But Alyssa occupies another ally slot... might be worth it if you build your deck around them. — Django · 2661 3/12/20
My Skull King Jim deck can pull off the Summoned Hound I think. He runs Alyssa Graham which can bury both his weakness and the Unbound Beast on the bottom. And he uses Alyssa, St. Hubert — TWWaterfalls · 473 3/12/20
Completing my comment - St. Hubert's Key and Hawk Eye Camera for Intellect boosts. The Summoned Hound would almost be one guaranteed clue per round with him. That is crazy. He can also kill the Beast if it does get out. — TWWaterfalls · 473 3/12/20
If Alyssa spots the beast you could also use eureka or arcane initiate to reshuffle your deck, intead of adding doom to her. — Django · 2661 3/13/20
Actually my favorite part of using Alyssa is to minimize the times that I shuffle my deck after sticking something on the bottom so I don't include cards like Eureka. I want to never see that card again. Of course the encounter deck doesn't always cooperate. — TWWaterfalls · 473 3/14/20
1

There's currently 4 investigators that can take advantage of this combo:

You could in theory also add Versatile to get Inspiring Presence