This deck uses the upcoming Jacob Morrison from Into the Maelstrom. 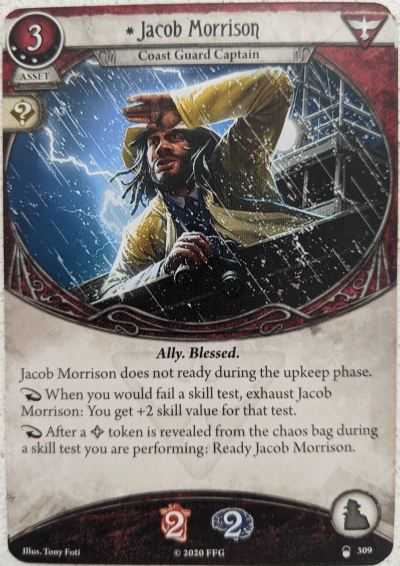 It's a simple plan. Instead of fishing for blesses, we ready Jacob by feeding him the same thing we feed Duke: dog food. It's not like David Renfield has ever complained, these Scooby Snacks are pretty great.

With Pete's ability, we can turn every card in our hand into a Lucky! that doesn't cost any resources. Along with the two copies of Lucky (3) in our deck, we can pass almost any test retroactively if we want to, baring the .

Not because blesses aren't good, but because blesses will depend on team composition. A single bless generator can't maintain enough blesses in the bag to make use of them in 3p/4p without running Favor of the Sun or Nephthys, which we aren't doing.

There isn't a survivor deck that won't benefit from Ancient Covenant and blesses, so feel free to add them, but drawing blesses to ready Jacob Morrison isn't part of the strategy. We usually want to use Pete's ability ready Jacob on the same turn he's used (which is actually less often than you'll expect), which means that we only have a small window to draw a bless and save a card.

A different deck will add bless generation and use Favor of the Sun as an additional means of reloading Jacob. This is not that deck.

At 0xp, this is a fairly standard Dark Horse Pete deck....

...with a few unorthodox choices:

Leo De Luca in a Dark Horse deck? It actually makes a lot of sense: Leo likes low resource curves, Dark Horse likes low resource curves. Leo also likes the highly efficient actions which Duke provides, and Survivors failing forward love extra actions as well (just ask Stella). The only problem is generating enough cash to play Leo in the first place if you don't see him in your starting hand. Don't fret too much about it. If you have enough resources to play him when you draw him (and you often will, the deck runs very cheap and you have Take Heart), it's a huge tempo boost. If you don't, then he'll just be dog food. Nothing Left to Lose is our first upgrade which is great for getting Leo out. He's worth it even as a late play if you have the resources as you didn't need those resources for anything else anyway, so don't bother mulling for him.

A Glimmer of Hope is premier dog food. It also allow us to spend down 1 resource to activate Dark Horse when recovering it from the discard pile, which is why I prefer it over Winging It on higher difficulties; it never hurts to have additional commits and Winging It becomes a lot less reliable to use when you start at 3 base skill value, even with commits.

A Chance Encounter and Calling in Favors is for recovering/healing Duke early on if he's discarded early by a Crypt Chill. They're mostly flex slots and often dog food, but I find them comforting to have. Feel free to replace with Keep Faith.

In rough order of priority:

With Rabbit's Foot and Leo de Luca, you can pretend to be Stella Clark, except you don't even need to fail to get the extra action. Also, you have a dog.

Always take resources during upkeep, even with Dark Horse. You lose the effects of Dark Horse during the Mythos phase, but that's what Ward of Protection/Lucky/Deny/commits are for. On your turn, you can usually spend down by playing an asset to activate Dark Horse.

Use Duke Investigate, move to a connecting location, investigate. If the shroud is too high, Take Heart, if it's low, Perception; if you fail, draw a card and Live and Learn. Like Stella, you don't mind making low-percentage tests, and you don't even need Track Shoes to do it; Duke's awesome like that. Unlike Stella, you aren't worried if you pass your investigate, you gain a clue instead of overshooting your destination like a lost mailman.

After a few upgrades, you'll find you can easily draw through your deck twice in a scenario; that's why we don't mind running single copies of cards. Seeing Wracked by Nightmares twice isn't fun, but having 4 actions a turn to clear it makes it a lot less of a pain.

You'd almost always want to reload Jacob on the same turn you use him so he can bail you out during the Mythos phase. You still want to commit to the usual sweet spots (+2 on Standard, +3-5 on Hard/Expert) on tests you really want to pass, since while spending a Perception refunds itself, while discarding a Perception to ready Jacob doesn't.

Exhausting Jacob to make sure your Perception or Resourceful test passes will refund you a card as well. This basically is the way you use Lucky! normally — to cover the worst tokens in the bag, except now you don't even need to pay a resource for it and it's nearly always available.

This deck is overkill on Standard, very strong in Hard, and quite viable (though less consistent) in Expert.