After Jeremiah Kirby enters play, choose "even" or "odd:" Reveal the top 5 cards of your deck. Draw each card with a cost that matches the chosen option. Shuffle the remaining cards into your deck. 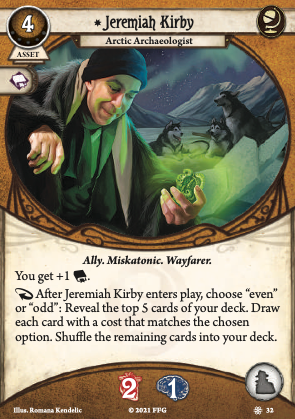 Firstly, I assume the FAQ will state that - is neither even nor odd, nor are uncosted weaknesses.

It is also important to remember 0 is an even number for lots of reasons and if it isn't in your local reality I am sorry and you contact your local Old One to offer your service to them, because the structure of the universe has already broken down to the point math is starting to fail. This can have big ramifications that push you towards 'even' due to cards like emergency cache and just because there are a LOT of 0 cost events, which is nice for synergizing with card draw.

Jeremiah is very interesting because he encourages you to play a deck that leans towards evens or odds. If you play him in a deck that is split right down the middle between your desired result of evens or odds, vs odds or evens depending on what you picked as well as all your skills and uncosted weaknesses, you are going to expect an average result of 3, rather than the 2.5 you might expect, due to the fact 0 is a possibility here and thus we are dealing with a range of 6 results rather than 5. However, how extreme the results can swing vary with how depleted your deck is. If your deck is split after mulligain and you play him turn 1, you have a 15% chance to get 4 cards or 1 card, and a 2% chance to get 0 or 5, and a 33% chance to get 3.

However, if it has been a few turns and you have drawn a couple cards and somehow managed to stay perfectly even (which is unlikely, but your deck will try to 'push' towards an even distribution because of hypogeometric probability: Your more likely to draw cards that are over-represented which means they get less over-represented) and you are down to 18 cards with 9 skills, undesired results, or weaknesses vs 9 of your desired 'hits,' you will find that you only have a 1.5% chance of the super extreme 0 and 5 results, a 35% chance to get 3 cards, and a 35% chance to get 2 and 4! This is because of that aforementioned hypogeometric probability kicking in 'harder:' if you drew 3 'hits' already, there are 3 hits already gone and now its really 6 'good' cards vs 9 'bad' ones.

So, on average this is proooobably drawing you 3, and it gets less stable as time goes on. But a 4 cost ally with poor soak potential (especially if they are your main lore buff!) who is netting you +1 investigate is merely sufficient. Our good old buglover probably still is beating out Kirby at that expected result: Seeker has a lot of good draw already, which can be used to assist allies after your set up, and while resources are generally less valuable seeker has a lot of expensive effects that can benefit from an extra cash a turn if your constantly investigating. If your going more testless seeker then draw helps more but the lore doesn't. He is a great stepping stone to other cards, but doesn't shine at those results. You could use charisma to run both, which I find questionable because seeker doesn't need THAT much help with lore tests and they do have some other great options for boosting them, but we can loop back around to that in a hot second.

But what if we slanted our deck towards even or odds? Lets say we make our deck almost entirely evens or odds cost cards, so that after our opening draw we have 20. How good is he then? We now get 4 cards around 40% of the time if we open with Kirby, 3 cards 30% of the time, 5 cards 15% of the time, 2 cards 10% of the time, 1 card 1% of the time, and 0 cards essentially never, with that result occurring less than 1 in 1000 times. This isn't a big gain in our expected upper limit (you should still probably plan for 3 most of the time), but you will 'brick' less often and draw 2 or fewer way less, making a more consistent rollout, and you probably care way more about NOT drawing 0, 1, or ideally 2, than you do about getting lucky and drawing 4 or 5, so it isn't too terrible that this mostly mitigates the disaster scenario and ensure you have some stuff to commit to tests or get you out of a pinch, rather than pushes the upper boundary of excess cards you might not need.

Is this worth it? Well Seeker has a LOT of really good even cost cards, so I would not be shocked to see an evens seeker: Glyphs and its upgrades, upgraded magnifying glass, Dream Diary,, book of old lore, encyclopedia,, occult lexicon AND the blood rites it adds to your deck, shortcut the list goes on and on. There are some power players in the odds slots, for example Necronomicon comes to mind, but its not too critical to avoid getting ANY odds, just not too many, so if you want the odd strange solution it isn't the end of the world.

Oh, and also, he apparently is good pals with a certain bug doctor which means he can self accelerate you into getting two ally slot lore boosts, which combined with some of the rest of this package may result in a neat "Clue Shotgun Daisy" build where you stack as many bonuses as you can to fire off guiding stones.

The big draw for odds I think would be that Kirby can help you snag up some segments of onyx, which is a big concern for any seeker and a huge reason to run card draw and deck search. Overall though, the odds slot seems a bit of a weaker pick for him (Which is why I think he was made an even card himself!), because while there are a LOT of good odds cost cards, they are often more utility based than deck defining and its harder to really stuff em in there. The lack of 3 cost events and the fact that most of the 1 cost events are more situational really hurts aligning towards that, and honestly it isn't too anti-synergistic with onyx because drawing cards still helps your future searches for onyx, especially if those drawn cards further accelerate you through your deck. Of course, this could all shift on a dime depending on your off class, and I am sure someome smarter than me will make a really great 'odds' deck down the line.

Finally, there is the third, secret, 'get thrown out of the O'Banon Casino for counting cards' deck strategy of just remembering what is in your deck, figuring out what you need and what you are likely to get, and deciding on the fly, which makes this a triple threat of a card: It is fine if you just play it and kinda forget about it as long as you have a good grasp on your deck's current state, it could be a fun deckbuilding challenge that forces you to try to 'figure out odd mystic' or figure out how many fast effects or good commit symbols you could stack in a certain cost bracket, or it could be an in game skill testing card where you need to weigh maximum card draw vs trying to 'target' cards you need!

As such, while he may not be razzle dazzle, Kirby is a worthy inclusion into the Arkham Card Game, simply because he is likely going to be REALLY fun to toy around with for a LOT of nerds like me who really like to bust out the abacus. He has a lot of depth that is hard to touch upon in this one review, like his synergy with fast actions or other ways to dump your hand out faster, or how he interacts with every other class, or how he changes the value of certain upgrades and will now make the difference between 0 and 1 cost waaaaay bigger for some characters, or how you might use this as a pseudo tutor by trying to make sure at the very least all of your 'deal with X situation' cards are even or odd together so you can always panic draw for them, or how a lot of staple seeker combat tools are odd cards and thus this encourages seekers to be more helpless.

A++ design, if nothing else, for just the sheer puzzle that was placed into every seeker's lap. And good seekers LOVE puzzles.

Downside: This guy assumes you don't run skill, or very few of them, which means you run pump skill cards instead (hyper awareness or higher education).

Upside: Insane payoff. Draw 5 (to a minimum of 3 if you draw both weaknesses), with 2/1 soak with +1 int is definitely worth the build around, especially if your off-class matches.

Note : you should run him with an even cost deck because 1. he can draw himself, and 2. most resources cards are even, which synergies further with the pump skill card logic.