You get +1 skill value during skill tests on Spell cards.

During a skill test on a Spell card, spend 1 resource: You get +1 skill value for this test. 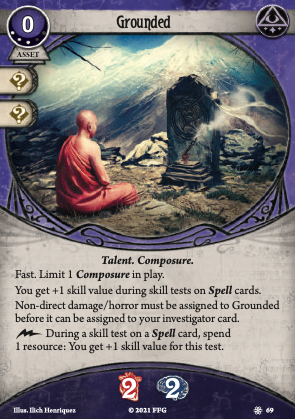 Grounded (3) is an upgrade from Grounded (1) in all of the ways the other Composures have been upgraded, but also note that the single icon on the level 1 is now ! We have a few cards that care about icons on cards that you don't really want to throw into the discard pile now, notably Well Prepared and Astronomical Atlas. Grounded joins a select few assets that have : quite a few signature cards, but also Prophesiae Profana, the two Precious Mementos, The Black Cat and The Red Clock (5). Grounded at level 3, fast, and 0 resources is the most easily accessible of the bunch so far.

Diana Stanley can take Well Prepared and Astronomical Atlas (though not sure she wants it), and loves the boost on whatever skill she is testing, since she will often test all of her skills. Diana/Well Prepared/Physical Training (2) is already a great combo, but remember that cards like Read the Signs actually are tests, so Grounded (3) does give you a boost there too, both on the wild icons for Well Prepared and the +1 skill boost. Finally, note that using Well Prepared for the icons here makes up for the fact that you can't use its boost on treachery cards, a notable downside already mentioned compared to Holy Rosary.

Mystics are chronically short of actions and resources. Grounded (3) saves on both by being a 0 cost Fast asset.

Imagine a Holy Rosary that doesn't take an accessory slot, costs 0, is Fast, and provides 2 health soak and it's easy to see the value of Grounded (3). For spellcasting purposes, that permanent +1 skill value isn't too dissimilar to the bonus provided by the Rosary, except it doesn't work on treacheries which makes it slightly worse.

It's great for saving you a Relic Hunter if you want that accessory slot for something else. For those of us playing on Expert, or even Hard, stacking this with the Rosary provides a much welcomed boost to the success chance of spells, with the option to boost further using resources to reach "anything but the autofail" thresholds against higher shroud/fight values. On Standard, this means that you can opt to run a different accessory: Heirloom of Hyperborea for Agnes, Lucky Cigarette Case for Dexter, or Empty Vessel for Akachi without giving up that sweet +1 . Base 4 mystics also get a buff as a result since it's much easier for them to make up the difference.

In exchange for giving worse stats than other composures, Grounded comes with an excellent 2/2 spread. Mystics can usually protect it against the mythos with Deny Existence, but it'll blow up on a single spell backlash from Shrivelling or the Azure Flame, so keep that Eldritch Inspiration, Counterspell, or Time Warp handy. If it does get discarded though, most mystics won't have recursion or the draw power to fetch it from discard, so better take a second copy.

Sadly, it doesn't work with Close the Circle or Mind's Eye, both of which would have really liked the skill boost.

Strongly consider including this on all 4 mystics and any mystic that's taken a few trauma on top of their Arcane Research.

suika · 8839
Question: What does the ‘Limit 1 Composure in play’ actually mean? When there is ‘limit once per turn’ on a location, without the word group, that’s a pass for everyone to use it once a turn. These composures are not mentioning the group limit. I didn’t want to include those just because of the limit, but with this, they would be more considerable. Thanks for your thoughts. BTW, the same limit is on the Venice masks. — holandato · 2 10/30/21
@holandato - It would state Group Limit 1 Composure in play if you can only have 1 Composure for the Group in play. Limit 1 Composure in play means you can't have have 2 Grounded, or Grounded and another Composure in YOUR play area. — Lemmingrad · 15 6/14/22