If this skill test is successful, add Intrepid to your play area as an asset with the text:

Forced - At the end of the round: Discard Intrepid." 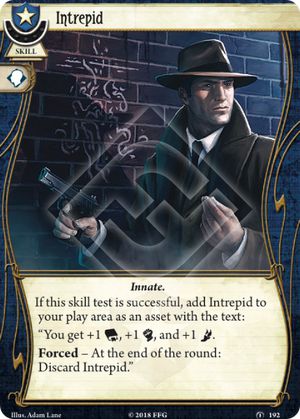 The flavor is pretty cool, but I think the mechanics are quite weak here. Intrepid is in close contention with Expose Weakness for worst card in the Heart of the Elders pack. The benefit is pretty weak and you have very little control over it. At best, Intrepid is going to work out to around +4 scattered over a bunch of skill tests. Even in this optimal situation, that's still a fairly weak card. I would actually rather take Take the Initiative or even Unexpected Courage just to get a more substantial boost to a single test, which is going to be much more consistently useful and much easier to plan around.

Why do people think Streetwise is better than Keen Eye? Part of the reason is just that Rogues have more resources to spare than Guardians, but another part of the reason is that +3 to one test is superior to +1 scattered over 3 tests. It's just much easier to benefit from the former.

Of course, then there's the problem that you only get that full bonus in a small minority of situations. A lot of the time, you'll actually get way less than that. After all, more often that not, you're not spending every action of a turn taking skill tests. And even if you do plan to spend every action taking skill tests, you're not always going to get the Will test you need. And even if you get a Will test, passing Will treacheries is really hard, and Intrepid's +1 is certainly not going to make you likely to succeed on its own. On Expert you would have to add an enormous amount of additional boosting or face a very strong chance of a wasted card.

I think this card is significantly better if there's a Mystic in the party. Mystics proactively test Will all the time and usually build their decks so they have a pretty easy time passing those tests. So you can have the Mystic go first, chuck this onto one of their spells, and then take your turn knowing you'll have the Intrepid bonus. This is much better. Even then, though, I wouldn't take this card. The payoff simply isn't big enough.

Yes, you could combine this with Leo De Luca or Police Badge or whatever, or "Let me handle this!" to try to hunt for a Will test when you want one, but honestly the payoff of this card is just way too low to make these combos interesting for me. I just don't see much here.

Fortunately, the other Guardian card in the pack, Custom Ammunition, is a huge hit, so Guardian players needn't feel too much regret about this one.

I think it is extremely specialized, because rarely would you want this instead of guts. Because you can't rely on drawing a willpower treachery, you need to find ways to make tests more frequently. Obviously, you then look to mystics for that.

Checking some deck building restrictions leads us eventually to Zoey and Rite of Seeking or Mists of R'lyeh. That definitely seems like a functional idea to me, depending on campaign and party make up. I particularly like Forgotten Age Zoey using mists (with Intrepid) to escape a vengeance enemy, moving to a new location, popping a Police Badge and then having 4 actions to use these increased stats (the badge gives you a +1 for mists as well, and if you had Xavier in play as well? Mmm-mmm!)

That's probably best case scenario, so depending on how hard it is to pull off that kind of combo probably determines if this card is playable at all. Would really like the power level of skill cards to be pushed in general.

This and Keen Eye lead me to believe that there could be a "power-turn guardian" deck that sets up to do massively effectual turns. Cards like Police Badge, Leo De Luca, and Double or Nothing all seem to fit that mold, so obviously someone like Zoey or Leo Anderson could pull this off. Intrepid becomes the least dependable part of that combo, however, because it has to lead off with a Willpower test, and on-demand willpower tests are hard to come by in-faction.

PureFlight · 589
Remember that in multiplayer you can always chose to act after your Mystic buddy who is pretty likely to make a Willpower test during their turn which you can use to activate Intrepid. — Death by Chocolate · 421 10/23/18
Yeah, Leo Anderson with Keen Eye, Intrepid, Police Badge, .41 Derringer(2) & Leo De Luca is a fun build. And he can use Liquid Courage to create an on-demand willpower test for Intrepid. — Herumen · 1320 10/24/18
Additionally, Jim Culver can splash Intrepid, if you 're looking for more ways to make those on-demand Willpower tests. He can also splash Leo De Luca or Quick Thinking to extend those Intrepid turns. — matt88 · 1852 10/27/18
1

This is a purely speculative review.

Of course the greatest argument against Intrepid is still the fact that it's not guaranteed to be playable when the benefit would be useful. You're not always going to draw Rotting Remains the round right before you do 3 fight or investigate actions (although there is a decent chance you'll manage to do at least 2 of those total). Don't forget the combo potential for investigators with access to extra actions, for example Leo De Luca and/or Quick Thinking (The latter is incidentally easier to trigger via the Intrepid bonus, so there's an easy combo right there! Intrepid seems more and more taylored towards Leo Anderson).