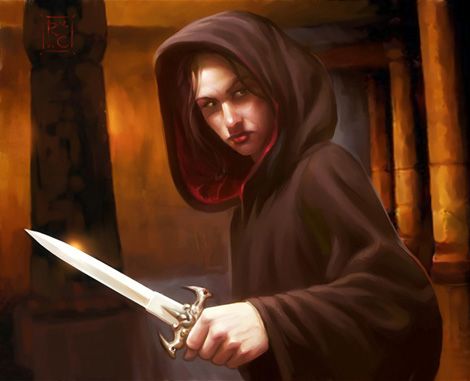 This is a first draft at revisiting the "Eldritch Knight" concept I published last year for The Circle Undone, inspired by my own experiences and by the new Empower Self card.

The general game plan is to build up to a board state of multiple Empower Selves, Well Prepared, The Hungering Blade, and Twilight Blade, then use the synergies between them and the rest of the deck to tear through the Mythos with repeatable high-damage attacks, lots of cancellation, and lots of repeatable stat boosting. Ever Vigilant and Uncage the Soul help Diana play these assets without being bogged down by having to spend lots of Play actions to get set up. Diana's ability gives her extra cards primarily, since the resource acts more like a discount than a resource gain. This means that she is more able to draw through her deck and set up Ever Vigilant and Uncage the Soul plays than other investigators.

The Hungering Blade is a bit tricky to make work, but the payoff of multiple 3-damage attacks for a 1XP card is a very lovely outcome. The challenge is to build up offerings on the Blade by finishing off enemies even though the Blade does not boost combat and Diana has a base combat of 3. We've got Prophesy, Take the Initiative, and Unexpected Courage to help, as well as powerful Enchanted Blades to soften up tough monsters, but to tie this concept together, Diana has something else, the inspiration behind this project...

Empower Self is a new card from the Point of No Return pack that really encapsulates the Eldritch Knight as a character concept. Instead of relying on Willpower for everything, this three-in-one spell boosts the other three stats at the cost of a spell slot. Diana can also take Well Prepared, to gain further repeatable boosts to her stats, since each Empower Self has two matching skill icons on it. So, with a suite of Empower Selves and Well Prepareds on the table, Diana can receive lots of repeatable stat boosts... useful to help her charge up The Hungering Blade.

On top of this suite, Diana has plenty of damage and treachery cancellation to protect her group from danger and to help her draw into the assets she's really looking for. To round out the deck, she's got a Hallowed Mirror to keep her group healed, David Renfield for extra resources and damage soak, Tetsuo Mori for damage and horror soak that also helps search for The Hungering Blade and Twilight Blade, a Lucid Dreaming, and a Prepared for the Worst for even more deck searching. Her decklist is very full of cards to push the concept, because it all synergises very well.

Sadly, I'm not going to get a lot of time in the coming weeks to refine this deck and figure out an XP progression. It might need some more draw to really get going, and as this is a standalone list, I haven't explored Ace of Swords, Seal of the Elder Sign, or Dayana Esperence (two willpower icons for Well Prepared!) yet. I also have zero clue-gathering in this draft, which probably needs to change.

So, let's use this space for discussion about an XP progression and about play experiences!