Fast. Play when you would succeed at a skill test.

You get +2 skill value for this test.

"McGlen, are you tryin' to get us both killed?"
"Not this time, pal. Not this time."
Darek Zabrocki
Winifred Habbamock #13. 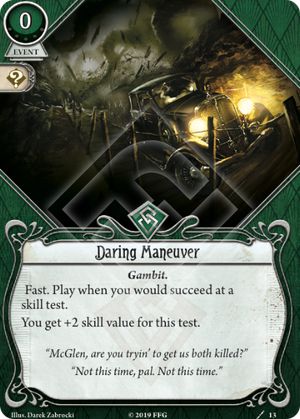 Maybe I'm missing something but this is pretty terrible card. Just take unexpected courage which always gives you +2 so you can at least succeed instead of failing. And if you happen to pass, you get +2 anyways.

The only benefit of daring maneuver is like Lucky!, you can play it after the fact to get guaranteed value. Unexpected courage gets wasted if you draw the auto fail token or you fail because your skill even with unexpected courage was just too low (should be somewhat rare).

fates · 33
Compared to "Daring Maneuver", "Unexpected Courage" gets also often "wasted", if you draw a -1 or other good token, you would not commit it too, if you would have known it in advance. It depends on the test and the over success effects you want to trigger. If it is just, that you don't want to break a lockpick and trigger LCC (0), you likely have wasted the card. Also, if with the modifier, you would have already maxed out on the damage, you could have done with your Sawed-Off Shotgun. Like you said, it's a "Lucky!" for Over-succeeding, and hence serves a different purpose in a deck, that would want to take it. Not that I'm saying, every Rogue deck should take it, even though in Survivor you most likely will take "Lucky!".. — Susumu · 271 5/15/22
This card has to be considered in its pool of cards. One of the main archetype of Rogues is the « succeed by » clause. You can now commit opportunist 2 on every test since you have a security net. Same for the upgraded pilfer, backstab, Lockpicks 0 and almost every weapons. I am not saying it’s an auto include but definitely a good addition to many decks to mitigate the risk/improve consistency — Valentin1331 · 24706 5/15/22
I like it in combination with shotguns since it allows you to scale the damage up if needed. — LaRoix · 1608 5/19/22