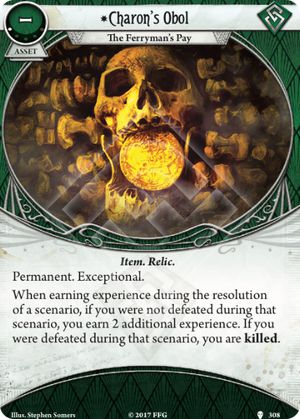 A few questions about Charon's Obol.

2.)Can you take the pressure of knowing that any game might be your last for this investigator? - Awesome! Take some free XP!

3.) No number 3. That is really it. This card is a playstyle card, but I think every rogue should take it regardless. If you are worried about getting taken down, you might invest in a copy of the next card, but I still think EVERY ROGUE should play this.

Unless you are in an all rogue group... then it is really a matter of first rogue to it (or to stick around).

Also, don't buy this late game. You need to buy this in the first scenario for optimal gains.

Myriad · 714
Wendy can take this, and she is exceptionally good at staying alive. — SGPrometheus · 224 3/30/18
Are you useing ultimatum of finality — Chaos1842 · 7 4/2/18
Not sure if this is the right place to ask, but can you take a permanent out of your deck in-between scenarios? The longer you have this in, the more it will hurt if you die and have to start with a new investigator. Can I use it for 3-4 scenarios and then drop it? — FutilityJones · 1 4/7/18
#FutilityJones: Outside of a formal ruling, I would say no. Under campaign play, when a non-permanent card would be added, a different card must be removed to maintain deck size. Since removing the permament wouldn't sastify the deck size limits, you cannot choose that to be removed, and must therefore choose something else (i believe). HOWEVER, if someone else can purchase and use the card, only one of you can have it in play, so only one of you takes the risks (and gets the benefits). Thematically, The Ferryman will always want his due; if you buy this, it is yours for YOUR life. — CecilAlucardX · 3 4/8/18
One major problem with this card is that, even if you find a way to consistently manage to stay alive, with or without Cheat Death, is that you might be defeated as a part of a scenario ending effect. A few days ago, me and my friends finished playing Scenario 6 of Carcosa cycle and didn't manage to reach a resolution, as the agenda advanced before we managed to advance the act deck (we were 1 turn away btw). As a result, all investigators were defeated. I wonder if Obol would trigger in this case, but I believe it would. — matt88 · 1679 5/8/18
It absolutely would. Defeated means defeated. — Death by Chocolate · 14 9/17/19
5

I was extremely excited when I first saw this card. I thought I was going to immediately buy it in every Rogue deck I ever played. XP is incredibly powerful and fun in this game, after all. But the more I play with this card, the less I like it.

The odds that your character dies at some point in missions 2-7 of your campaign (if they die in mission 1 or mission 8, that's not really relevant for the Obol) are just way too high. Even if you run "I'm outta here!" and Cheat Death, I just think the risk is too great. Starting over midway through a campaign at 0 XP is a truly terrible feeling. In solo, maybe it doesn't feel quite so bad, but I really would not recommend this in multiplayer.

Note that "I'm outta here!" is far from a perfect failsafe here. Many scenarios don't have a resign space or have one that doesn't show up until the final Act. It won't save you then.

Moreover, Charon's Obol can also hurt you even if you don't die. This is because the Obol makes you play scared. Vastly increasing the consequences of dying makes it harder to play effectively. A very common situation in this game is the following: your investigator is severely hurt, down to 1 or 2 health or sanity remaining, but only a couple of turns away from a potential victory. What should you do? A normal investigator can go for the win. Sure, you might take a trauma, but that's not really a big deal at all. And you might win! With the Obol, you can't really do that any more. The consequences of defeat are too high to take otherwise profitable risks.

Furthermore, playing the Obol can force you to stuff your deck with durability cards (like the aforementioned "I'm outta here!" and Cheat Death), at the expense of better cards that actually help you win the scenario directly. This hurts your deck and can mean that your deck's power level isn't that much higher than a deck that doesn't run the Obol, but also doesn't have to run these cards.

Still, I can see the temptation here. If you like the thrill of risk and are OK with a strong chance of having to starting over, go ahead. But personally, I find the game much less fun when I'm running the Obol. And setting considerations of fun aside, if I were just trying to maximize my odds of winning the campaign, I do not think I would take it.

CaiusDrewart · 1767
What this card boils down to is this: Get an extra 13 xp over the course of a campaign. (5 if playing Night of the Zealot)(2 of that xp only counts if you carry the character over, so really 11/3) In exchange, tension is considerably higher, as every failed chaos pull or monster becomes magnified. If you like the tension, take it; if you don't like tension, then ask yourself if that 11 xp is worth all the stuff Caius listed above. — CecilAlucardX · 3 4/16/18
Check your math. The Obol is exceptional, so it costs 2 xp, and since you can't buy it until after the first mission, you only relevantly have it for 2-7 (if you don't carry over) in a campaign or just 2 in NotZ which makes it worth a net 10 xp in a campaign or a net 0 in NotZ. — Death by Chocolate · 14 4/17/18
1

This card is powerful but as one might expect, you are playing with fire here. Just be aware that you spend 2 xp to get it and then it grants you 2 xp each time from then out. This means that should you buy this after scenario 1 (the only reasonable time to get this) you don't really get "bonus" xp until the conclusion of scenario 3, as following scenario 2 it just pays for itself.

(MILD SPOILER) Without spoiling too much there are scenarios which kill your investigator if they are defeated Obol or no Obol. So the total number of scenarios you have to survive with Obol is slightly lower than one might initially think since you would be killed with or without Obol in these cases. (END SPOILER)

It is also worth noting that Ursula and Leo can take this card. Easy to miss it.

Complete list of people who can play this as of FA: Skids, Wendy, Jenny, Sefina, Lola, Leo, Ursula, Finn.

This is worth getting if you are comfortable with the risk involved. But you must get it early, otherwise just leave it behind.

Ok, so I have a probably very niche question:

My question focuses on the last "that". My reading is that if you were defeated but did not earn any experience, you wouldn't die. Because the "that" is referring to a scenario in which you earned experience during the resolution. Is this reading correct?

PanicMoon · 1
Every scenario has the investigators earn experience as part of its resolution, even if the amount earned was zero, so I think your reading is not correct. To the best of my recollection, every resolution that doesn't involve the investigators being killed has the phrase, "The investigators earn X experience, where X is equal to the amount of victory points in the victory display." It is during this step that the obol would trigger and kill you, even if X=0. — SGPrometheus · 224 5/30/20
There are a few exceptions where no experience clause exists. Although without explicitely looking them up, the one I specifically remember involves redoing the scenario instead of advancing. — Death by Chocolate · 14 5/30/20
That's an interesting case Death by Chocolate brings up. It does specifically say to resolve investigator death IIRC (or maybe it was just defeat?). I always assumed that was code for "Yes, you still get Obol'd, even though everybody else gets to try again." lol — Zinjanthropus · 16 5/30/20