If Handcuffs is not attached to an enemy: Evade. Use only on a Humanoid enemy. This evasion attempt uses instead of . If you succeed, attach Handcuffs to the just-evaded enemy.

If the attached enemy is non-Elite, it cannot ready and doom cannot be placed on it.

Magali Villeneuve
The Depths of Yoth #265. 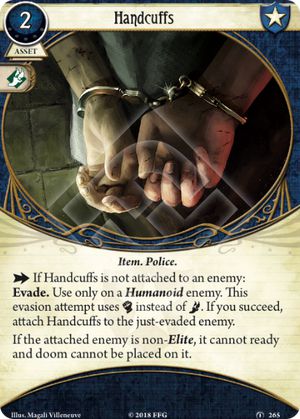 I asked about handcuffs and other effects. The reply:

Rules Question: I am a bit confused as to how "Handcuffs" interact with some encounter cards. The Truth is Hidden says "flip" clues to doom, not "place" doom. Would it still flip the doom on Seekers of Carcosa? Mysterious Chanting and Dance of the Yellow King look for a cultist in play. If a cultist or lunatic is handcuffed they cannot ready, but they might be the only cultist or lunatic in play. Are those cards effectively negated?

1) Flipping clues to their doom side is not the same as placing them. In this instance, the token has already been placed on the card, so Handcuffs will not prevent the tokens from then being flipped over to their doom side. Note that the agendas in Echoes of the Past each read “After 1 or more clues are placed on an enemy in play: Flip those clues to their doom side,” meaning the flipping occurs after the tokens are already placed. 2) As for Mysterious Chanting and Dance of the Yellow King, the answer is… sort of. Mysterious Chanting simply adds doom to the nearest Cultist, so if the nearest Cultist is handcuffed, then yes, it will do nothing. Dance of the Yellow King is trickier. It reads: “… If you fail, the nearest Lunatic enemy readies, moves (one location at a time) until it reaches your location, engages you, and makes an immediately attack.” Technically, the movement, engagement and attack aspects of this effect are not dependent on the enemy readying. While typically only ready enemies can move, engage, or attack, there is no rule stopping them from doing so while exhausted if an effect explicitly instructs them to. So strange as it may seem, if the nearest Lunatic enemy is handcuffed, it won’t ready, but it will still move to you, engage you, and attack. (Note that this would be different if the effect used the word “then” somewhere in it, for example “readies, then moves…”)

I understand that both of these answers are tricky distinctions, so I apologize for any confusion.

This has an interesting use case for investigators. The majority of the time any would likely remove the threat from the board instead of evading it. There are already quite the number of limitations to this card. But even if the targets in a particular scenario are plentiful, you need a reason that you would want the humanoid permanently evaded rather than disposed of.

There are plenty of cultists that accumulate doom, but they are usually easy enough to remove from the board except for maybe Brotherhood Cultist. That makes dealing with him much easier. I think that the real use case for handcuffs would be in multiplayer formats or scenarios where the deck shuffles itself from the discard pile often. If are placing handcuffs on the enemy, then they will remain in play and never get shuffled back in. So you will only see that threat once. While not as good as adding it to the victory display, this can still be helpful for some of those pesky humanoids you might hate seeing such as Seeker of Carcosa.

Even non-fighting splashes for a card would likely have many other options to consider over this one.

An unusual card for ', but not a bad one. One important detail to remember that you can engage the just-evaded enemy and drag them with you (they won't hit you, because they are exhausted).

This suddenly means that Roland Banks and William Yorick are interested in this card: both have effects that trigger when they defeat an enemy. While this is most certainly a case of police brutality, it opens up interesting lines of play.

Roland can drag an enemy onto a high-shroud location to trigger his own and cards like Evidence! and Scene of the Crime. Yorick can use his own to keep replaying this, moving it from enemy to enemy.

The biggest drawback is that this card needs humanoid enemies to work. Sadly, neither of the above investigators can take Adaptable.