Damien Worm
Before the Black Throne #321. 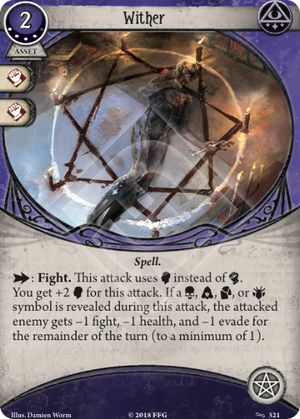 EDIT: I misunderstood the card negatively, which is funny because I was very much pleased with it to start with! This should reflect how good the card is better:

I'm a fan of Wither, a cheap asset that can be used infinitely kill off problems that aren't worth charges from other assets, it's a great backup weapon, 1-off, or to dual wield with Shrivelling or Enchanted Blade or Ornate Bow or Timeworn Brand (I.E, a fight heavy whose role is to kill things, like many forms of Agnes Baker, Diana Stanley and Jim Culver). "Super archmage" builds with Sign Magick will also be interested. The -1 fight and evade trigger is surprisingly useful in making hits land or getting out of trouble.

So, the upgrade is worth it's XP cost because:

Layer all of this with Wither's initial ability to infinitely channel into damage and you've got yourself a very good attack spell, whether it's for the 5- juggernaughts who do everything via or the 4- midrangers who like to use their other stats for things and miss the occational spell charge.

This card stands out as being FAR more impressive than it seems at first glance, especially in the latter half of a campaign where special tokens tend to be much more numerous. Wither a very impressive attack spell that manages to stand alongside without replacing Shrivelling.

Edit 2: After now playing in 3 campaigns with Wither, I'll stand by it except in 1 circumstance. In a skillful and informed playthrough of Dunwich you might manage to not actually add any special tokens to the bag, in this case Wither looses much of its luster.

Tsuruki23 · 2014
I want to like it, but at 4xp I think it's overpriced. I'm not too sure of the maths on this, but I'm guessing that most of the time you're only going to be at 40% or worse of pulling a token that would trigger the -1 damage. The +2 will is replicated by Shrivelling(3) anyway so the hit rate is not a big deal. Why exactly does this spell cost more xp ? It's overpriced for what it brings to the table. Not bad exactly, but it's never going to be a priority upgrade. — Sassenach · 138 8/1/19
I think it could be interesting in an Olive+Grotesque build (though so is Songs of the Dead), but otherwise in terms of doing damage I'd take Shrivelling 3 over this. Agnes in particular likes Shrivelling better since she gets to do extra damage anyway if she pulls a spooky token. I think if it gave the -1 health/fight/evade for the whole round it would be worthwhile, because then you could have anyone else come in and punch a now withered monster. Maybe some strategy with Swift Reflexes? — StyxTBeuford · 12467 8/1/19
It doesn’t actually matter whether the health reduction is before or after in your example. If it had been after then you would (1) deal one damage, (2) reduce its health from 2 to 1, and (3) then it would die because it has damage equal or greater than its health. — Death by Chocolate · 790 8/2/19
#Death by Chocolate. You mean that the reduced health keys off total health rather then current health? — Tsuruki23 · 2014 8/2/19
Definitely. Health is the number printed on the card. It doesn't change with damage. — CSerpent · 93 8/2/19
Also note that the health reduction is only until the end of the investigator's turn. You're right that it defeats a 2 health enemy, but it is not the same as damage because it will go away if you don't defeat the enemy.. — CSerpent · 93 8/2/19
if you are with 1 HP left and you fail an attack with special token against a monster with 1HP left and retaliation keyword, are you both defeated? — chrome · 6 8/30/19
It should also be noted that the effect happens in step 3 of the skill test (https://arkhamdb.com/rules#Skill_Test_Timing), so you could you're sort of at a +3 vs special tokens. You can also end in a sitaution where the enemy dies, before the attack is finalized, which is a bit funny — dotPeddy · 1 9/16/19
I think it is worth combining with Shards of the Void. It takes the normal downside of Sealing 0s and turns it into a positive for Wither, which also lets you conserve Charges. — Radix · 1 10/12/19
@chrome, the special token effect happens at ST3, so I think you would defeat the enemy at ST3, before the enemy can retaliate. (The retaliation only happens AFTER the entire skill test has been resolved, as per the section on the "Retaliate" keyword in the Rules Reference.) The only exception would be if you're fighting an enemy that already only has 1 (max) Health, because Wither can't decrease the max health of the enemy down to 0. — iceysnowmansolo · 1 11/25/19
If several special tokens are revealed during a test (with grotesque statue, olive or dark prophecy, does the effect trigger several times ? — JemJaime · 8 11/27/19
@JemJaime No, for a couple of reasons. If the highest review in Shards of the Void is accurate, then effects which reveal and then ignore tokens do not consider ignored tokens to be 'revealed'. As such, Grotesque Statue or Dark Prophecy would only 'reveal' one token. Olive McBride also has an explicit ruling that if an effect triggers on a token type revelation, "Such an effect will not trigger twice if two of the designated tokens are resolved." — Ruduen · 513 2/12/20
Totally understand why people don't like this card, but to me this is a way to kill an enemy without using a charge on Enchanted Blade for example. If you hit a 3 health enemy with Wither and a special token, the enemy now has 2 health and 1 damage, so you can just attack with Enchanted Blade, and it is important to note the card reads; you may spend a charge, which in this case you are going to kill an enemy in 2 actions with no charges spent which is huge in my opinion in a Mystic build. — TiguiDaisy · 13 4/28/20
4

The Timeworn Brand to Shrivelling (5)'s Lightning Gun, except not really. Unlike Sixth Sense which is a viable replacement for Rite of Seeking and Clairvoyance, Wither should almost never be taken over Shriveling 3/5.

Without token manipulation support, the chancs of drawing a special token is usually in the range of 30-40%. Even at the 0xp range, weapons that don't give bonus damage are usually not taken (even as backup weapons) for good reason — it's usually too action inefficient to fight without bonus damage. Weighing in at 4xp; Wither needs to do better than +0.4 damage to stand on its own.

With token manipulation support (read: Grotesque Statue, Olive McBride, Dark Prophecy), the chances improve, but the payoff is still poor for the investment since you only bring Wither up to par by adding 0.3-0.5 damage per attack. Token manipulation isn't free, costing charges, slots, allies, cards, and plays, compare what other classes get with the likes of Beat Cop/Vicious Blows/Deliah that very reliably add +1 damage for roughly equivalent investment.

The fact that you can draw a special token, fail, and still do damage & reduce stats is counterbalanced by the fact that the extra damage doesn't stick around if you fail to kill within a turn (aka most elites), Retaliate, enemies with on-Fight effects, enemies without max HP, etc. Or that in Hard/Expert, failing with a special token can be a really bad thing.

What about running this along with Shrivelling for increased consistency? That might have been good before Azure Flame (3) existed. Although you can run a pure beatstick mystic that takes all 3.

If you're fighting a lot, Wither is too action inefficient to fight with on its own (and you'll run out of token manipulation too fast). If you're not fighting that much, Shrivelling's 4 charges should last you quite a while until you find Recharge, Twila, or its second copy. If you really want to conserve charges on that Swarm of Rats, Sword Cane is now a much better option.

suika · 7644
I agree. I want to love this card (the art is awesome), but I struggle really hard to justify picking it up. Infinite uses is nice, but unreliable +1 damage is difficult to work with when the support to recharge is so much easier to achieve. Think it'll get tabooed like Springfield or Winchester? — LaRoix · 1468 1/11/21
Hopefully as a mutation instead of an XP modifier. This would be playable at 2 XP, but it'll also mean there won't be another high XP version of Wither. My humble proposal would be something like changing it to: For each <symbol> revealed, canceled, or ignored during this attack (max 3)... — suika · 7644 1/12/21