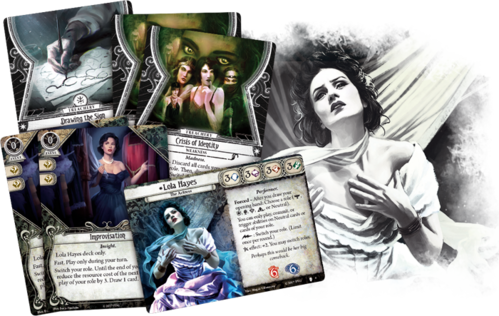 Lola Hayes's strength comes from her deckbuilding options of up to level 3 cards from any class. Unfortunately, her role restrictions, weak stats, and potentially crippling weakness lead many to write her off as a weak investigator.

This deck is the culmination of trying to answer the question: "What can Lola Hayes do better than any other investigator?"

I have tested and refined it through two-player campaigns and standalone scenarios on Hard difficulty. The level 0 version shown here performs fairly well: fighting when needed and can even serve as a primary clue gatherer. The fully upgraded version is hands down the strongest deck I've played and trivialized most scenarios.

Once complete, this deck absolutely crushes higher difficulties by avoiding the chaos bag altogether. Lola Hayes is the only investigator with access to both Will to Survive and the full suite of extra actions cards, enabling 7+ action turns where you succeed at every skill test. While this would normally be a gimmick, Lola's access to upgraded cards means that we will draw our full deck within the first 10 rounds of every scenario in only 7 actions + upkeep.

The full guide for the upgraded version of the deck is: Lola Hayes Performs Many Miracles. This guide focuses on how the deck gets to that point.

Our cards focus on fighting. While would be preferable in a vacuum, we will eventually want be able to fight after playing Will to Survive without needing to switch roles.

Once we have something to combo it with, we will want every card that gives us extra actions, but most cost experience. Until then, we take Leo De Luca + Quick Thinking but use as our second class (eventually shifting out of it when we buy the cards we really want).

Our third class is , and will eventually make sure we draw experience combo cards very consistently. Until we get our amazing cards, though, we don't need that much card draw and will happily take good cards that go well with Dark Horse and aren't weak to Crisis of Identity:

We round out our deck with a few neutral staples (Flashlight, Emergency Cache, Overpower, Perception, and Unexpected Courage) that can be used while we're in any role.

You have high enough base stats and so many skill cards that you don't need to spend time gathering resources or playing assets before you can contribute. Use that extra time to get a head start on advancing the act deck.

While we aren't the best at fighting, we can deal with enemies well enough. Our base of 4 along with a minimal boost from Fire Axe / Meat Cleaver gets us to a decent chance of hitting enemies. While we run Overpower, there aren't many other icons in the deck, so you'll generally want to save Unexpected Courage for tests.

Once we get Will to Survive, the game changes completely. To play it, you need to do some minimal setup the previous turn. There are two options:

One more resource during upkeep phase, and we're ready to play Will to Survive, fight as needed, then switch to and commit Quick Thinking for 4-6 actions where we succeed at every test! (and it it will only get stronger and stronger from there).

Once you've accumulated 26 experience, this deck will consistently perform miracle 7+ action turns with Will to Survive twice a scenario. Until then, you shouldn't count on that combo and should just play Will to Survive whenever you have to pass 3-4 relatively difficult skill tests. If all the cards fall into your hand, great! Don't spend time drawing cards looking for it, though; this deck is more than capable of finding clues and fighting enemies without it.

With Ace in the Hole and Quick Thinking (x2), Will to Survive is an incredible play, but it's very inconsistent. The rest of our upgrades focus on making us draw this combo reliably:

By this point, I've found that Baseball Bat is preferable to Meat Cleaver due to the icon, no horror, cheaper cost, and no risk of breaking with Will to Survive.

You now have so much card draw that you'll typically be playing Will to Survive 3-4 times a scenario, often taking 6-7 actions during those turns. The final card we need to make this completely insane is: