Lola Hayes and the Scroll of Secrets 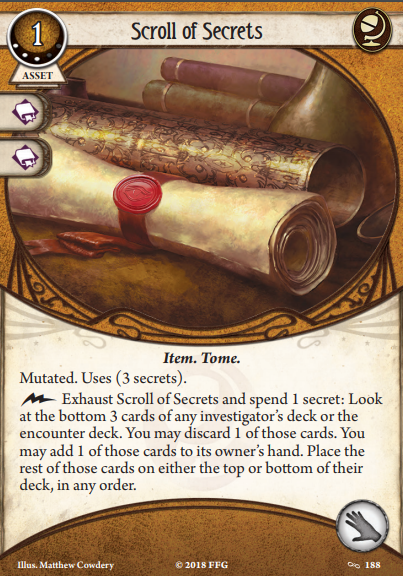 Good news for all Lola fans (and Rook haters) everywhere! Scroll of Secrets has been buffed and one of the best investigators to take advantage of this is none other than the actress herself, the often overlooked Lola Hayes. If you're anything like me and have avoided using Mr. "Rook" shenanigans, the good news is that the newly buffed scrolls can play a similar role in Lola and help us take advantage of some synergies unique to Ms. Hayes. Join me for a bit and forgive any typos or other mistakes as I take you through the fever dream I had when I peered beyond the veil. Special thanks to @Djhuti for his miracle performing Lola deck which has inspired many of my own lists in the recent past, including this one

I won't pretend to be the first one on here to have this idea, but the name of the game with Lola is weakness mitigation. Crisis of Identity has arguably one of the highest ceilings of devastation out of any signature weaknesses we've seen so far. That being said, it can be one of the easiest to mitigate through card manipulation or drawing it at the correct time. Like I mentioned in my intro, many people have resorted to the controversial Mr. "Rook" to provide both weakness mitigation by virtue of self sacrifice and more cautious card draw with his lower value options. Not being a big fan of the chess man myself, I was actually very happy when Rook got the boot and the scrolls got the buff.

The two main parts of this strategy are played by the duo of Alyssa Graham and Scroll of Secrets (at least in our starting deck). Both these cards are great for being free triggers that can be very flexible by dealing with either our own deck or the encounter deck. The most direct synergy here is that Ms. Graham can look at the top card of either deck, put that card on the bottom of that deck (for a doom) and use scroll to either discard it if it was a particularly nasty treachery or weakness or draw it immediately if it's a card you desperately want. You can also just use Alyssa to leave it on the bottom if you're not planning to shuffle your deck and if your scroll has run out of secrets. There are of course, a number of additional synergies that require more planning and careful though. If you see a card you want to draw on the top of you deck with the Speaker to the Dead, you know you're free to just draw from the bottom of your deck with scroll. If you see your weakness on top and can't afford the doom, you can delay it by putting the bottom card on top or by committing Eureka! to your next test. There's plenty to do here and I welcome anyone to explore these interactions, especially when we upgrade the scroll.

A side note to this is that since our focus is on mitigating Crisis of Identity, cards with dual classes actually become stronger with Lola since they can be used in multiple roles and can satisfy either role (but not both) in deckbuilding. Here, we only really have the scroll but you can always include more guardian cards to take advantage of Enchanted Blade and handle enemies better or maybe bring some Tennessee Sour Mash for encounter deck protection and dealing with odd numbered health enemies. Grisly Totem might be worth considering, but I wouldn't recommend .45 Thompson since it'll take up both our hand slots, which we'll need for our scroll.

The strategy for playing this deck varies on deck composition and changes as we upgrade, so I'll stick to the initial version of the deck which was made with solo in mind. The most important is that we have three main roles: Seeker, Mystic and Survivor. We'll usually stick to Mystic for our weakness mitigation plan as well as picking up hard to get clues with Drawn to the Flame. The seeker role will be for otherwise getting clues and moving around in a generally faster way with Working a Hunch, Cryptographic Cypher and Shortcut. Note that we can use scroll in either of these roles and when you're a Seeker is when you'll be the most tempted to use scroll just to move a card to the top of you deck at clutch moments. The Survivor role is still very important, notably for getting your Dark Horse or using Scrounge for Supplies to pick up an important Level 0 card but also for some emergency fighting with Fire Axe. Be careful of staying in this role during upkeep or risk losing two very high impact assets to Crisis of Identity!

The one Rogue card we have in the starting deck is Quick Thinking which you'll probably only use once a game anyways when you're worried about drawing The Whammy and/or are testing high anyways, say on a 1 shroud location or just punching some rats. This card will be important later on and we'll transition into a bigger rogue role as we upgrade the deck.

Now for some important cards that I haven't mentioned. The first is Truth from Fiction which acts as copies 3 and 4 of Scroll of Secrets but it's also great in providing some boosts for investigating as copies 3 and 4 of Perception. This card gets even better as we upgrade our scrolls and I'd recommend moving up to Truth from Fiction if you get the chance. Delve Too Deep is a flex slot that allows us to upgrade our deck faster if we can afford the action and draw at the end of a scenario or maybe even if you know what is coming, either in the next agenda or because of Alyssa Graham/Scroll of Secrets. Eureka! and Inquiring Mind round out a Seeker suite of cards that is just generally helpful because of their action compression. Most of these cards can be switched out for more scenario-specific tech cards if you find yourself stuck on something particularly devious.

The focus of this deck is to move fast between locations and get clues with less actions using our Seeker cards. Efficiency might have been the name of the game if it wasn't already weakness mitigation and these cards reflect that. If you find yourself getting caught up on enemies or treacheries instead of clues, change the focus of the deck to include more guardian and survivor cards. Or if you're wanting more clues, maybe in a multiplayer game, switch up the seeker rig to raise clue compression. See Card considerations later on for more on this.

There's many possible ways you can take Lola and I personally choose to focus on the combo of Will to Survive alongside the Rogue extra action cards. But before that there are a number of core cards to this build that you might need to upgrade. It's important to remember Lola's deckbuilding restrictions when upgrading or switching out cards, so keep that in mind!

Now, for the Lola specific combo, we'll be transitioning mostly out of Mystic cards and into rogue cards to take advantage of huge turns with Will to Survive. Drop Delve Too Deep after the first few scenarios if you haven't already. Thanks again to @Djhuti for the shell of this combo.

If it wasn't clear by the tag or anything I've said previously, this deck is mostly focused on solo play. Fortunately, Lola's deckbuilding makes her the most customizable investigator in the game. I'll give a brief explanation on options by highlighting 3 types of cards shown here:

That was a lot! Hopefully it wasn't too much information, but such is the nature of Lola and her immense card pool. Lola Hayes definitely has an interesting place in the community and there's a lot of ways you could tackle dealing with her shortcomings. This is my take on it and I'll always love her for the endless possibilities she provides. She also has a very high skill level to play, not unlike Patrice or maybe Calvin, another characteristic that draws me to her. Many people would see the multiclass assets as cards for Lola to avoid so that her weakness doesn't hit has hard, but hopefully I've at least convinced you that they can be a big advantage.

Thanks for sticking with me thus far for my first deck tech on here. Please let me know what you thing, any ideas for improving the deck or anything I missed. I'm @Davi on the Mythos Busters discord, feel free to reach out to me there as well!