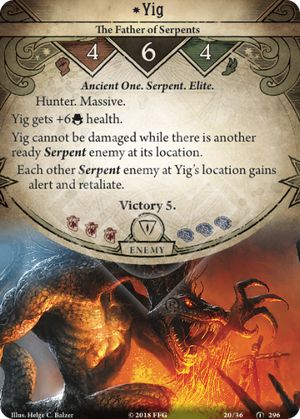 Forgotten Age isn't everyone's favorite campaign, but it's worth noting the original Curse of Yig story was based in Oklahoma. So the next time you're wishing you weren't lost in the jungle while Poisoned and covered in vines, just remember: you could have been stuck in Tulsa.

This optional boss rewards 5 XP for killing him, which nice if you can juggle the vengeance needed to get here. That said, Yig has a decent bit of health. I recommend making use of the discard ability on Knife to get an additional damage in while fighting him. 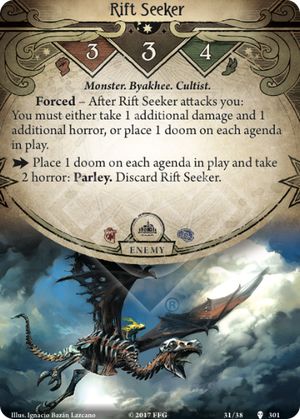 Interesting note: Rift Seeker has Cultist, so once it's shuffled in you can use it as a target for Mysterious Chanting that doesn't speed up the doom clock the turn it enters play.

Aside from that neat little interaction, Rift Seeker is honestly pretty basic; no Hunter if you decide to evade it and leave it behind, no "Spawn:" instructions spawning it at a different location preventing you from dealing with it, not even Retaliate in case you fail the 3 (or 4 once The Entity Above, The Entity Above, or Swallowed Sky enters play) test to hit it. Yes, it does have the Parley option, but that's a trap, paying a high cost (2 horror and 2 doom) for something that's honestly not that difficult (defeating a slightly tougher Ravenous Ghoul). Assuming you don't draw the against it, you can fairly safely treat Rift Seeker's text box as blank, except for Traits: those actually make it interesting, allowing you to fish out a (moderately) tougher Cultist with Mysterious Chanting in exchange for no doom entering play.

NightgauntTaxiService · 25
There are two copies of Mysterious Chanting in the deck. And they might also get reshuffled. So if you evade and ignore this card, it might bite you back. On the other hand, there are certainly occasions, when the parley action is good. 3 testless damage is great for an action, and if horror doesn't matter for you, you already know, which agenda is the actual act, and the other one would advance anyway in the next mythos phase, there is certainly no trap in this ability. I like the lore of this card. The tiny rider makes it traited a cultist, while his "horse" is a byakhee and monster. This gets even better in Barkham, where you spawn a stray cat, once defeated. — Susumu · 234 12/5/22
We used the Parley just the other day ago. It can be cool because other player at the same location not engaging with this can go first and help spending an action to get rid of it safe from any friendly fire, and we need to get the agenda advancing to reduce the effect of skull at that time. We got quite a lot of actions saved. — 5argon · 2103 12/5/22 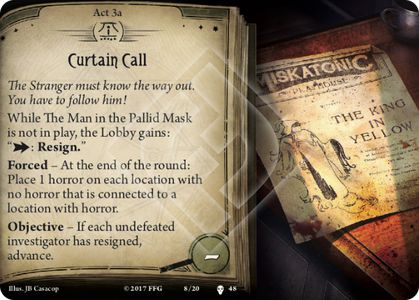 Dumb question: Where does The Man in the Pallid Mask go after he's defeated? He's only earned as a weakness during scenario resolution, but he has a player card back; does he just get added to the defeating investigator's discard pile?

I ran this in a Tommy Muldoon deck focusing on Custom Modified Becky and it did not disappoint. Tommy often struggles with draw consistency because all those Assets shuffling back makes his deck that much thicker. Now you can just aggressively draw through most of your deck (including Resourceful for even more draw) in case Prepared for the Worst didn't find Becky. As a side benefit, Rookie Mistake is also likely to come up sooner with more draw, so you don't have to play around it all game long.

Carson Sinclair and Preston Fairmont will also appreciate this. Carson needs to draw his Skills to support his friends, while Preston is just a rich sack of meat before finding his loadout. Both of them don't really care about the lost action either. One's already giving his actions away while the other's likely running Leo De Luca.

Haven't played Vincent Lee yet, but if the synergy with Geared Up is legal, him being able to take Studious, Geared Up and this card without Versatile makes his 1st turn setup pretty consistent.

Not sure about the other investigators with off-class access to Survivor Level 1 events though. Tony may want this as Rogues don't have a lot of draw aside from Lucky Cigarette Case and some high-XP options, but Survivor seems like the least viable secondary class for him. Minh and Mandy already can draw and search very well, so their actions are better spent actually winning the game. Agnes' weakness is so simple yet brutal that adding more draw to her looks like a bad idea (unless you engage in liberal deck manipulation). 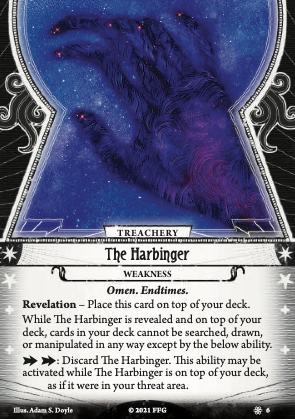 I personally think that a Norman deck should be running Eureka, Foresight, Parallel Wills, and Scrying because there's just so much synergy between those cards and his ability. That said, it won't always be possible but you would be able to get around Harbinger if you ever caught it in a scry or parallel wills - make sure to Eureka when you know it's in the top 3 cards and name it with Foresight ahead of time (per FFG it looks like for Foresight and "Search and Draw" effects they want the timing window to be prior to the search part). If it gets to the top of your deck normally you can't Foresight it since it prevents itself from being drawn, but if you can draw it from inside your deck that bypasses the limitation and Foresight cancels it before the Revelation effect would put it on top of your deck.

That said, if you know it's coming you can also just prepare for it and time the "draw" when you know you can spare the two actions, but that combination of cards does let you skip having to deal with that and is worth noting I think.