Do it all Preston

A Preston Deck that seeks to answer the question - can the millionaire do everything? My answer is... I'm gonna Trial by Fire with a little help from my friends (Lola Santiago and Leo De Luca)!

The deck is shown here without Trial by Fire as arkhamdb doesn't yet know that it has been released. For the correct deck simply swap:

This is an all-rounder Preston deck that is a consistent damage-dealer and pulls its fair share of clues. Just as importantly, it's extremely fun. As StartWithTheName has pointed out in the extremely fun Yorick deck that inspired this one – you play the game to have fun, right? This deck is great fun to play.

The deck has cleared TCU currently released and the Core Campaign with excellent success in two player, standard. It has also completed an extremely successful solo run through the Core Campaign. I'll seek to refine and add improvements and I am very interested in suggestions.

The answer I have arrived at for turning Preston from a man of measly 1s into a utility man who does whatever is needed is as follows:

Early game, you want to find those cards (later also Lola) and get them down. This deck plays a bit like an inverse Ashcan Pete deck. Whereas Duke is ready to get to work right away, Preston starts out very vulnerable to everything, but most especially enemies.

If you haven’t found these cards in your opening hand then Leo De Luca, Take Heart and Drawing Thin are there to draw you into these enemy and treachery solutions. More than is the case for other investigators and even more in solo you face the risk of being pinned down by an enemy with no way of getting out. So do not be afraid to spend a chunk of time drawing cards early to get key pieces in play - you'll more than make up for time spent later, trust me. Still play well of course – think about what you can do for the team and who could help you if you’re in trouble, play other assets or events that will be helpful and take money off your inheritance when appropriate (more below). Trial by Fire, Cunning Distraction, Rise to the Occasion and in solo Small Favor provide you with ‘in a pinch’ enemy solutions.

Later in the game you become a powerhouse of efficiency who can more than make up for a potential slow start (and often your start isn’t that slow if you’ve had a bit of luck).

If you have your Leo De Luca, Fire Axe, Dig Deep, Lola Santiago, Drawing Thin and Track Shoes down you’ll hit a kind of turbo mode and have turns like this:

Investigation Phase. Grab a clue for some of your resources, Boost to move two locations for a single action, Buy two clues from your location. Wonder how you possibly have two actions remaining.

Obviously that's a lot of cards to draw and play but the point is (1) you have a lot of draw and actions and resources for drawing and playing cards, and (2) you don't actually need all of these cards down to be very efficient.

Both are valid approaches with pros and cons. The former requires a regular use of an additional action and makes damage dealing harder as you won't be able to make good use of the hugely valuable +2 per resource boost and +1 damage from Preston's 'second signature card' Fire Axe. The latter relies on having a lot of soak for treachery protection and simply accepts you will fail treacheries - and sometimes that can be a big problem.

This deck is about flexibility and adapting to the situation. It gives you plenty of tools to happily spend your resources on each turn (Lola Santiago, Leo De Luca, Intel Report, Cunning Distraction). It also gives you a reliable attack (Fire Axe and evade (Dig Deep) option for sinking your resources into.

But if don't need or want to spend your resources, you can stockpile them to protect against or treacheries.

How often you want to use the on Family Inheritance is largely up to you but I've found it can be very powerful.

Generally if you'll end your turn with 2 or more resources on your inheritance it's worth considering stockpiling. With three resources at the end of the round Fire Axe will be still ready if you draw an enemy, and you'll have encounter protection from or tests, especially if you hold Dark Horse (3 resource gets you to or 5) or Rise to the Occasion. Even having more resources than 3 on Preston is generally not a problem for your Fire Axe. In the worst case scenario (a 2 or 4 health enemy pops up in the encounter phase (odd health enemies aren't a problem)) and you have a bunch of resources on Preston, you can take either a +6 fight or an evade action pumping your (and potentially Drawing Thin if you don't care about the result) and you'll be back to swinging for two damage.

On the whole Drawing Thin and Take Heart are huge in this deck. There are plenty of ways to spend your money and these get you more resources or draw you the cards you need to set up.

Knowing how much soak to include is a bit tricky - certainly not as much as other decks which accept that you'll routinely fail will tests. I found little trouble with fairly regular boosts to willpower from Dig Deep. You also have your - in a pinch cancel for when there's a terrible effect and you have no resources - in You handle this one!. You also have a few different soak tools in the form of a single Cherished Keepsake, Perseverance (which I like, but if you prefer a second keepsake you could you have it) and the possibility of recurring these from Resourceful. And of course there is Leo De Luca.

As you upgrade Lola and Charisma come in. Do note that because Preston is so rich the second copy of Leo or Lola very playable over an earlier injured or dead copy.

It's also worth pointing out that, particularly in TCU, there are many treachery cards that require an action to test or test at the end of the round. Dig Deep and Dark Horse are great for dealing with these that otherwise would present a problem for Preston's stats. You'll be able to use your inheritance to deal with these.

If other investigators have some tools to help you out in a pinch I think you'll be able to slim down on soak and invest more heavily in fun tools (some suggestions are below). If your allies are packing Delay the Inevitable, Logical Reasoning, cancellation or other healing tools you'll thank them.

For a solo deck make the following modification:

This is the deck that I used for a standard solo run through TNoTZ where I collected all 6 cultists and all VP locations in the Midnight Masks and finished the Devourer Below before the second agenda advanced (admittedly much easier when you collect all 6 cultists). I followed the upgrade path above grabbing Ace in the Hole and a couple of Devil's Luck for the final scenario.

Small Favor was included here mainly for an option for dealing with early game enemies when you’re not set up. It does have the drawback of provoking attacks of opportunity. On the other hands, the icons are good and the card can be useful in specific situations (e.g. sniping an acolyte on another location).

In other campaigns I would probably adjust this slot. In TFA, 2 x Decoy seems the obvious replacement and in Carcosa perhaps 1 x Small Favor and 1 x Fine Clothes.

For more damage over clues throw in Small Favor over clue tech. For a fighter Preston I'd also seriously consider adding in Quick Thinking or Swift Reflexes for an even bigger boss-killing Drawing Thin turn.

For more evasion add in a second Cunning Distraction or Decoy.

There are a lot of toys Preston can play with and I'm sure there are many other ideas! I look forward to exploring them and hope you do to. 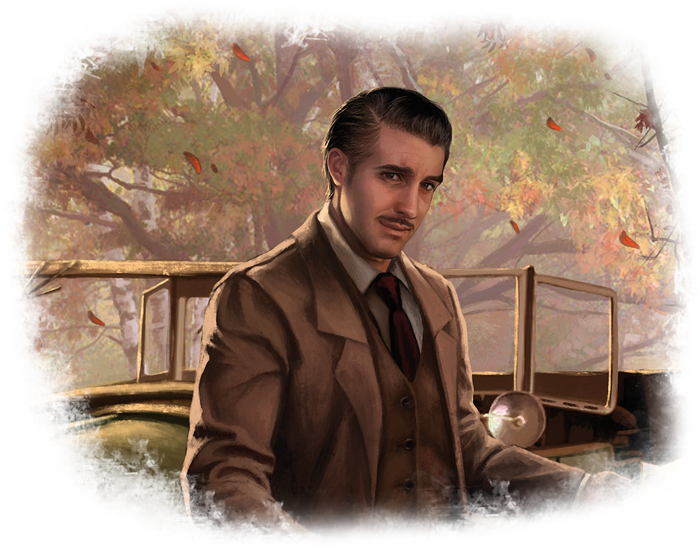