Written in the Stars

Discard the top card of your deck. If that card is a weakness, shuffle it back into your deck. Otherwise, for the remainder of your turn, while that card is in your discard pile, commit it to each eligible skill test you perform. 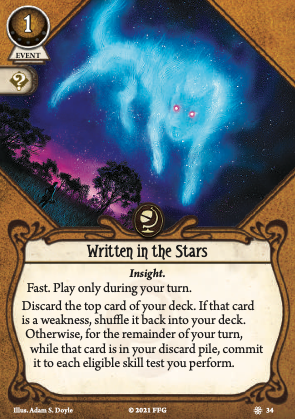 It's obvious that Written in the Stars is good for Norman, but in this review, I'll talk about other seeker investigators.

This ability is very powerful if you discard good skill card which works during investigation: Deduction, Perception, or Eureka!. Currently, most seekers can perform 4 investigation actions for a turn thanks to Eon Chart & Ariadne's Twine. It means that Deduction gives 4-8 additional clues, Perception gives 4-8 cards, and Eureka! gives approx. 4 cards with searching. The problem is that we don't know the top card of deck. There is some supporting card in , but how about taboo-ed Scroll of Secrets (3)? We have 3 chances to check the top of the deck.

Additionally, Amanda is another investigator who considers this card without any supporting cards. Commonly, she contains lots of skill cards which work during investigation: Deduction, Perception, Eureka, Unrelenting, or Leadership. With her investigator ability, she commits 2 cards at each investigations. Additionally, most cards in her deck has or icon, so that even if we play Written in the Star without checking deck, discarded card could support the investigation; of course, little deck tuning may be needed. In my case, very few cards contains no-: Hiking Boots, Death • XIII, Cryptic Research, Pathfinder, Forewarned, Shortcut(0), Mr. "Rook".... Even if those card is discarded, it's not critical for Amanda; it's because deck tempo of Amanda is fast enough to cycle your deck.

This seems like it'd be a powerful card for Norman arkhamdb.com

Also, as it turns out, reviews have to be at least 200 characters long, so that's why this sentence is here, and for really no other reason.

It has been said by Elkeinkrad already, but I want to point out how this can be good in any investigator that has around 10 skills or more in their Deck.

Digging your deck with the Scroll of Secrets (3) allows you to do the following, without spending a single action:

• And then immediately use Written in the Stars.

Also one quick mention to Eidetic Memory that can give you extra uses at the end of a Scenario though I'm not so sure it's the most effective way to spend your XP.

It is of course better to use this in Astronomical Atlas-Norman or Amanda as pointed out, but also:

• Deck-cycling Harvey Walters can benefit from this, especially as it helps deal with that terrible weakness

• Minh Thi Phan who is the Skill- would love it too (imagine finding Sharp Vision), and can also Scavenge it!

• Mandy Thompson loves digging her Deck and would love to find Eureka! (even though it doesn't use the "search" words so it doesn't trigger her )

• Daisy Walker can also use Parallel Fates, Alyssa Graham and why not use Written in the Stars on Enraptured to fill up the Scroll with even more Secrets

• Ursula Downs to get rid of that crippling Call of the Unknown though she's not the best user of this combo.

• Luke Robinson, Jim Culver could also use the card with Alyssa Graham and Scrying (3) but it seems less worth it.

Valentin1331 · 25306
I wonder why nobody mentioned Alyssa Graham, which is an option for seeker/mystic investigators. — Tharzax · 1 4/4/22
Oh right, I will add her! It's quite an expensive way to look at your top card though, 4 resources and 1 Ally Slot, but she works every turn which is good. — Valentin1331 · 25306 4/5/22
You mention Scroll of Secrets (3) letting you scry your deck without spending an action (which assumes the taboo mutated version) AND then also mention Abigail Foreman who only trigger on activate actions.... which tabooed Scroll no longer has??? — synkout · 1 6/28/22
1

There's a couple cards that tell you what's on top of your deck, those are all well and good, but really, the only truly dependable combo for this card, is Norman Withers.

Norman and skill cards go together like water and oil, when the skill cards float to the top of his deck, they blot out his ability.

I dont think Written in the Stars currently warrants a deck slot, even for the apparent, "perfect character", but perhaps there's synergies that I just dont see yet.

Tsuruki23 · 2350
Norman's signature allows you to swap the top card for one in your hand, so if you hold Deduction until the right moment, slap it on top, then play this, you're in great shape. — SGPrometheus · 688 9/27/21
I agree with Tsuruki23. I tried this card with Norman and it seems like a "win-more" card. If everything comes together, you have an amazing turn but in that case you were probably already doing pretty well. Save your deck slots for cards that will make a difference when things are not going well. — GeneralXy · 37 7/25/22