Uses (2 resources). Replenish these resources at the start of each round.

Resources on Sleuth may be spent to pay for Charm, Tactic, or Tome cards.

During a skill test on a Charm, Tactic, or Tome card, spend 1 resource from Sleuth: You get +1 skill value for this test. 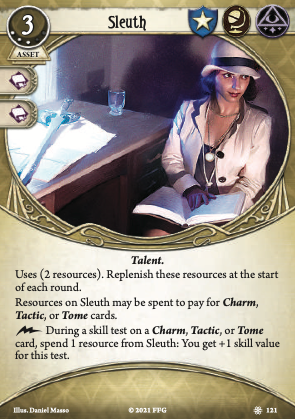 All of the new triple class talents from Edge of the Earth are very neat cards that can grease your wheels and make you better at what you do. No matter who you are or what deck you're building, you're pretty likely to find what you're looking for between the 5 of them.

Sleuth however has a few peculiar things going on. The discount on playing those three traits is fairly universally good; the strange thing about it is that if you're about Charms and/or Tomes you have very few ways of continuing to use Sleuth once you've used it to play your stuff. Apart from literally 3 Tomes, the only staying power of the ability is in playing Tactics, a trait which only appears on Events, and therefore are hard to use more than once or twice a game each.

There are scant few cards with these traits which wouldn't benefit at least partially from the resource discount. To help save time on checking interactions for the ability, I've made this chart:

As of the release of Edge of the Earth there are no Charm cards with skill tests on them.

...Plus an Edge of the Earth story asset.

Tactic contains some expensive one-off attack events. Building for just event discount rather than test boosting can be a lot of fun too, and shape the deck away from asset stacking style. (Same for Prophetic with Fortune, Crafty with Trick/Insight. All the non-asset traits.)

I feel like 3 on an Event is much more agonizing to pay than 3 on an Asset as they are one-off, so -2 cost here is a much better deal than it looks considering these events need the right timing to play. It is perfectly fine to "waste" 2 replenishing resources as what you get is the readiness to play strong Events.

When I get to -2 on 2~3 cost Event, it is enough to make them feel like an entirely new card, as a part of experience of using them is often painfully holding them on hand while waiting for resources or even queue up until you can setup other Asset first. You may even have no choice but to commit it away with everything considered, a lot of opportunities lost.

Anyways, here are some early events :

But this card is strategically priced at 3 pips, limiting characters that could take it, while not having and icons, so aiming for and discount is a puzzle. At the same time it is fun to think about which specific character can really play which card at discount while the others can't, really set the theme that a character may have special talent unlike no other.

"Skids" O'Toole with 2x 2x 2x of each core Rogue events at discount would feel like superpower but his access is only up to Lv.2 so the plan is foiled. Instead Parallel Roland Banks can have his niche to be able to swiftly use events. Or go great length to have Zoey Samaras use Elusive and Cunning Distraction as her splashes? Who can Waylay at 1 cost? These series of card has been fun so far to build on and I am glad it is at 3 XP instead of 2.

This is probably the hardest of the cycle to make work. However, there's one new tome in TSK, grim memoir, that works pretty well with this as it's both expensive and requires multiple skill tests. Using in a Daisy deck that also managed to find another good tome as a story asset.