Uses (2 resources). Replenish these resources at the start of each round.

Resources on Bruiser may be spent to pay for Armor, Firearm, or Melee cards.

During a skill test on a Armor, Firearm, or Melee card, spend 1 resource from Bruiser: You get +1 skill value for this test. 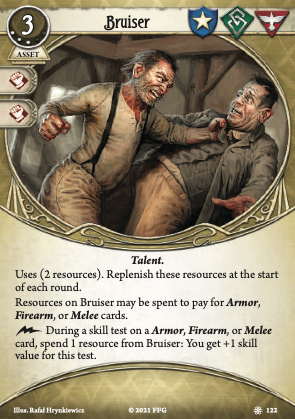 When you see this card, your mind probably immediately jumps to Guardians. After all, they love their guns and fight boosters. And they tend to have expensive guns, win-win right?

Well... not so fast really. Guardians already have fight pretty darn well covered, and this isn't going to be a better option than most tools they can take to serve as a fight booster, especially at 3 XP. Between your base stats, Tarot Cards, Friendly Local Officers, and Evidence on a stick a guardian can easily sit at a fight value of 6 before their +4 from their Flamethrower comes into play.

Guardians also have expensive weapons, but they tend to play a singular weapon due to both how powerful their 5 xp suite are, their ability to keep it topped off with reload cards they can ensure are sticky and the strength of their tutoring. Guardians with the right mulligan policy can force their big expensive 5 XP weapon on the first two turns. So you really can't view this as a discount card for them.

Charisma to run more of your +fight allies, Reliable, Ace of Swords, heck, even Physical training (4) all kinda low key do what this card does but better? If your looking at this as a chance to really boost one attack with one card (say... you are running Shotgun for some reason and you really want to make that initial hit slam someone), you even have stuff like Enchant Weapon which for most guardians is just better and blows this utterly out of the water for weapon usage.

I am sure a guardian deck is out there that may want to spam niche weapons with huge burst swings and plays lots of armor cards too (Old Shotgun decks with pocket fulls of grenades maybe?) but overall this is just questionable in the guardian pool. Some of the tri-class 'pick a tribe' cards are economy cards, but these 3 assets are not spammable in guardian, so it really comes down to being a booster card in guardian, and guardians just do this better, and while this can stack with them, are you really going to need more than 8 deckslots dedicated to passive boosting?

I would say the most compelling case for this card is in the rogue class, though some survivors may want it as well.

Rogues can get really good at fighting, but struggle for static boosts, especially with how almost every slot they have is highly contested. They are less likely to power upgrade their weapons because while they have good higher end weapons they are less able to force them into their hand than guardians, due to lacking Prep for the worst and Mr. "Someone deserves a raise for figuring out this pun name."

A lot of rogue weapons and strategies reward you for playing more than one weapon over the course of a game, due to their low ammo counts and come into play effects, and while this won't give you discounts with Sleight of Hand it will fit nicely into sleight of hand style decks. After all, if you are running sleight of hand you eventually plan to PLAY that gun you keep flashing. And you often want to 'over-succeed' on rogues, so having a boost can really matter.

And, of course, there is the base stat gap. Even if rogues COULD run as many slotted boosters as guardian, most rogues have fairly low fight values, despite being a fighty class. They make up for it a bit with a lot of fantastic skills and events and draw to fuel those skills, but between their lower weapon bonuses and lower stats it can take a rogue a bit more effort to get to where they are hitting as often as a Guardian, let alone succeeding by whatever.

Survivors can also get some value out of this too. One unexpected candidate for this card is everyone's favorite 1 fight orphan herself, Wendy Adams, is a strangely great candidate for Bruiser, because she can combo this with her famous fireaxe to get much more serious value out of those free resources, or use it to push her attack value up to 9 for a swing.

Every single one of these cards is going to feel different just because the flavors of these tags matters so much, but I think for bruiser the question isn't going to be 'do I like weapons and maybe armor?,' because this doesn't really help those in generic cases that much. Instead, the question is 'Do I need a fight boost but lack access to one in slots I can safely give up, or am I going to be playing 3+ weapons in a game?'

dezzmont · 110
Can this pay for abilities on cards, or just the cards themselves? paying for fire axe does make that distinction important. — Zerogrim · 236 10/12/21
You don't "pay" for abilities on cards, you "spend resources", so I would say no. Of course, you can use them on a "Fire Axe" fight test, but you would only get +1 per resource spent. On the other hand, it synergize well with "Dark Horse", because the resources are not in your resource pool, so you can leave them on the card for an additional test and still trigger "Dark Horse" on the first one. — Susumu · 206 10/12/21
I'm pretty sure, if you "pay" something in AH LCG, this always referes to a cost. Abilities on cards like "Fire Axe" are no cost, they are an optional way to sink resources into. — Susumu · 206 10/12/21
Triggered Abilities have "cost". RR in costs part states "Some triggered card abilities are presented in a "cost: effect" construct". I think the resource to boost skill value is cost, but I'm also not sure that it works with triggering cost. — elkeinkrad · 303 10/12/21
You're right, my bad. The colon literal defines everything left of it as a cost. — Susumu · 206 10/12/21
I will update the review if we get an FAQ. I still think that this particular card works better as a slotless +2/double +1 than a cost reducer for most characters and that survivors will in general consider it due to only really having Jessica as a fight booster, even before this card's synergy with Yorick or Bob. — dezzmont · 110 10/12/21
I don;t get the pun behind Tetsuo Mori, anyone care to explain? — Eruantalon · 101 2/2/22
Mori is the Latin word for death, which already is very applicable to Mr. Tetsuo Mori, who's main job is to die. However there is an additional, even more brilliant layer of the pun that links it into how Mori helps you when he dies: A Memento Mori is an object or symbol that reminds you death is inevitable, and I would certainly say the item Tetsuo gives you would certainly count to the investigator who watched him die! — dezzmont · 110 3/9/22
2

This card is amazing for (most) Guardians, whose two primary concerns are 1. paying for their extremely expensive assets, and 2. making sure those assets actually hit when you need them.

The only Guardians that get nothing from it are Nate, because it doesn't work with events and doesn't really benefit Boxing Gloves for lack of a Fight action, and of course Carolyn the pacifist... with one exception.

Bruiser synergizes with Enchanted Armor. The test is a test on an Armor card, so those recurring resources can give you a +2 boost to soaking that damage. I doubt it's worthwhile for that alone, but it's a nice boost for an otherwise underwhelming card. Potentially useful for Sister Mary and Zoey Samaras if you want a more convoluted alternative to Spiritual Resolve.

[Edit:] I should probably also talk about the other classes that can take it.

Survivors tend to run a lot cheaper, so the resources aren't as much of a lifesaver. They also generally depend more on events than weapons, which it doesn't benefit. A big standout is half-Guardian William Yorick, who carries more weapons than your average survivor and tends to recur them fairly often. Those assets are cheap, but he has to pay for them each time, so it adds up.

On the Rogue front, there's of course Tony Morgan who tends to play more like a Guardian and focus less on economy than your average rogue, so a combat-boosting card that also provides econ is very welcome. Jenny Barnes is already rich, but needs a little help on the combat front due to a measley 3 , which Bruiser can provide. It helps her get out a .45 Thompson and actually hit with it, and synergizes with Mauser C96 to turn the free weapon-only dollars into actual cash to fuel the rest of her kit.

I've used it with success on Lily, paired with butterfly swords and Gang up.

Even with the proper discipline, basic butterfly swords are a bit low on strength boost for the first strike and a little nudge from this card goes a long way, but the real winner is gang up, since you'll be packing four classes and hitting with it at +4/+4!

As existing reviews point out, it's relatively difficult to get value from Bruiser, because few investigators that repeatedly play Armor, Firearm, or Melee cards, relegating the main use case of this to act as a pseudo-static boost on fight checks. It works fine for that purpose, though it's a little overpriced for it.

But there are quite a few investigators who would go quite far with the discount. Allow me to highlight some of them: