Lola Hayes and The Scottish Play 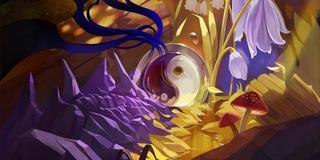 Hello everyone, I'm back with another installment in the Lola Hayes mysteries. Tonight, our beloved actress dares utter the name of The Scottish Play and face the curses head on. This deck seeks to take advantage of Lola's level 0 to 3 access of all classes, using the best of the three curse-focused classes: Seeker, Rogue and Mystic.

Note: The published version of the deck has 2 copies of Justify the Means but my original intention was 1 copy of that card alongside 1 copy of The Stygian Eye.

In my last Lola deck, focused on the taboo'd Scroll of Secrets, the name of the game was weakness mitigation. In this list, I still feature the level 0 version of Scroll but the central aspect is not on avoiding your weakness, but on playing events and keeping up your card draw. We're only playing 4 Rogue Assets and 2 Seeker/Mystic assets, so getting hit with Crisis of Identity shouldn't be much of a problem.

Seeker is our main class and it's how we advance the game, mostly circumventing skill tests and drawing cards. Stirring Up Trouble and Working a Hunch are our most efficient ways to find clues. Scroll of Secrets, Deep Knowledge and Preposterous Sketches draw us more cards, which is important in this event focused deck. Gaze of Ouraxsh is our highest damage dealing card, but you'll need to have a stocked bag to make sure you get the most out of it. I wrote a little bit on the numbers behind this card, so check it out my Horror by the Numbers article for more on that. This is also the class whose Covenant we've chosen and along with Fey, we have two ways to repeatedly mitigate curse tokens during tests. The Stygian Eye is a card that is often underestimated but can be very flexible combined with Lola's flat statline. It can also be combined with extra actions from Eye of the Djinn to make even more use out of the boost.

Rogue is our shenanigan class, as usual. Faustian Bargain keeps our economy going, allowing us to pay for our other cards or to keep circumventing tests with Lola Santiago. The homonymous archaeologist not only provides us with boosts to two very important stats, as well as some much needed soak, but allows us to continue dodging curses during skill tests. If we want to take the curses head on, Eye of the Djinn makes up for at least one curse by setting our skill value to 5 and if we do draw a curse, then an extra action awaits us. Similarly, "Lucky" Penny can mitigate those curses by transforming then into bless tokens, actually raising our skill value. Notably, since it's a forced effect, even when Lola is not in her green role, Penny will still continue to transform tokens for us. Justify the Means is our panic button and it can be a little costly or just outright unplayable depending on the state of the chaos bag. Lastly, Ríastrad is another way to deal some damage,

Our Mystic cards supplement the strategy outlined by our Seeker and Rogue cards. The most important piece here is Tides of Fate because it allows us to empty the bag of curses and open up the door for cards that couldn't previously be played. While this requires some careful role management to take the most out of, it's a vital strategy for not stalling out when the bag becomes full. Promise of Power is another very powerful card and can be played even when the bag is full, albeit at a hefty cost for the 6 sanity actress. Drawn to the Flame is another way to circumvent tests when picking up clues. Ward of Protection is another panic button that can usually be deployed on the turn after you've switched to Mystic in order to play Tides of Fate. We can also make use of Scroll of Secrets while in this role.

Lastly, we have a few but important neutral cards. Being able to play these in any role as Lola is very powerful, but they also have some synergy with the rest of the deck. Flashlight works well with Lola Santiago since you can activate her ability during the flashlight test. It also lessens the amount of curses added with Justify the Means. Backpack acts as another form of card draw in neutral that can do a good job of fishing out our two exceptional item assets, in addition to Flashlight and Scroll of Secrets. Lastly, Favor of the Moon can be used to just keep curse tokens out of the bag for a while or to use in combination with Fey or Eye of the Djinn. Notably, it doesn't specify skill test, so you can use it to guarantee at least one extra damage with Gaze of Ouraxsh as well.

In order to outline the strength of Lola's deck building when it comes to curse cards, I've featured a higher XP version of the deck, ready for standalone play - if you're willing to deal with the weaknesses. If you're playing this in a campaign or want to try tweaking the deck a little bit according to your play group or just personal preferences, I've added a few cards to the side deck that can be added to the main deck:

In addition to the upgraded deck, I've also included a potential level 0 starting list for playing this in a campaign. This list plays a lot like an event focused Lola deck taking advantage of the "pay to win" cards at level 0 such as Intel Report, Decoy, Art Student, etc. Unlike the curse suite, these cards are pretty resource intensive so we have some Emergency Caches and also Take Heart to get us some resources. Flashlight can help us make the most of "Look what I found!" while we don't have Lola Santiago. Dynamite Blast is another panic button that we can take advantage of to blast multiple enemies if we can't just evade them. Lastly, Delve Too Deep is another way to get more XP to fuel our many curse cards. Overall, the strategy of the level 0 deck is similar to the upgraded version, using events to avoid tests, with a higher focus on resources than curse tokens.

Other card considerations for the level 0 deck include:

That's all I have on this deck so far. It's a very fun archetype and it really shows off a bit of Lola's strength in deck building. You can play it in solo or take it to a group that is ok with you filling the bag with curses.

Thanks for reading, hopefully I've encouraged you to try out Lola. She can be super fun and very powerful as well. If you're interested in reading more stuff from me, check out my Arkham centered blog over at Obscure Studies. See you all next time!