The Chef cooks you a delicious stew made of your enemies and Police officers.

EDIT: If you liked these Decks, please try the Carcosa Beginner Deck Series:

Please press the ♥ even if you don't plan on playing the Deck just to give it some visibility for new players. 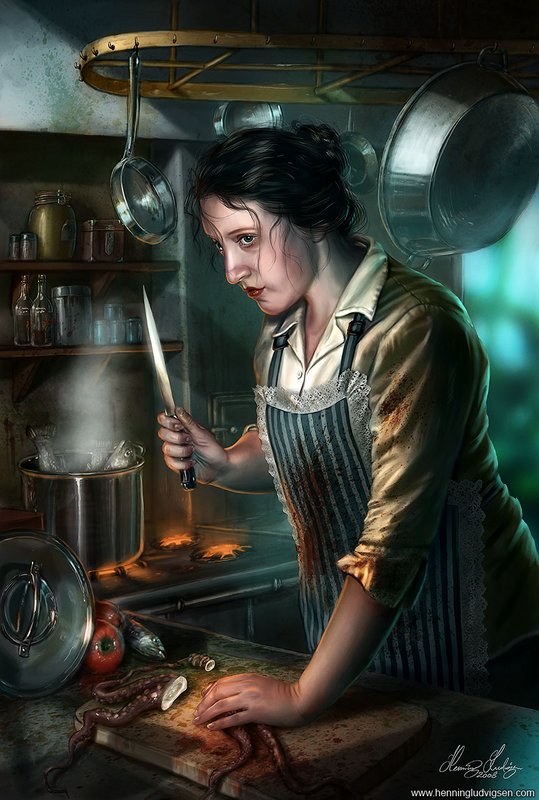 This Deck is part of a series of Decks created for the release of the Revised The Dunwich Legacy Campaign. Find the other Beginner Deck Guides for the other investigators here:

Pete and the Underdog

If you do not own The Edge of the Earth, an alternative only using the Revised Core and The Dunwich Legacy is available at the bottom in "Make your own Deck!"

Drawing an enemy during the Mythos Phase can debilitate your party, costing many actions. With Zoey, deal with them quickly and prevent your team from being swarmed and eventually defeated!

Limiting ourselves to the newly released campaigns, Revised, The Edge of the Earth and The Dunwich Legacy, we will try to show how to make Zoey deal with enemies like nobody's business.

• Succeeding at your tests

• Use your .45 Automatic, Machete and Brand of Cthugha to kill your enemies faster doing damage 2 at a time.

• Use Zoey's Cross and allies to deal extra damages to enemies with uneven health points and heal them afterwards with Bandages.

• Machete, .45 Automatic, and Brand of Cthugha allow you to deal damage to enemies 2 by 2, which is quite good, especially early game.

• Zoey's Cross allow you to deal an extra damage to an enemy, making it possible to get rid off , Rats and 3 hp enemies with one Machete Hit.

• Early game, 10 damage in one turn is usually the most that you should be dealing to an enemy. With Zoey's Cross, Machete/.45 Automatic/Brand of Cthugha *3, 2 Vicious Blow and using your Guard Dog or sacrificing your Beat Cop, you could potentially deal them in 1 turn!

• To deal more damage later in the campaign, you have:

•• Beat Cop (2) for an instant damage that you can abuse thanks to Emergency Aid and Bandages. 2 Beat Cops (2) on the table means 2 test-less damage on tap.

•• Fang of Tyr'thrha or Gang Up (if Brand of Cthugha and Bandages down) to deal 4 damage in one action and finish what's left with your other actions.

•• Vicious Blow (2) that is a luxury update if you need extra damage in the late campaign.

Succeeding at your tests:

Zoey Samaras has amazing fighter abilities, but only has 4 base . We therefore need to boost her stat to improve her chances to succeed tests and gain tempo. Ideally we would reach 7 at each tests to make it roughly +3 at any fight action.

• Jury-Rig on your Machete for 3 times +2 to your fight action.

• Overpower and Vicious Blow for a boost on a stern test that you may miss.

• Bruiser is also a way to boost your tests once all your weapons are on the table.

With all of this, except during the setup, you should always be fighting around 7,8 or even 9 . This will prevent you from ever missing an attack.

• Prepared for the Worst is a stapler; brings your Machete if you don't find it in your opening hand and after Mulligan. It is an overall better target than the .45 Automatic as it is cheaper and does not use Ammo. The .45 Automatic is still valid when dealing with multiple enemies.

• Dodge is here, especially at the beginning in case you cannot kill every enemy and in case one has 2 or 3 Horror.

• Emergency Cache is your first economy card, upgraded into On the Hunt that also brings 3 resources but is fast and also brings you an enemy instead of another Encounter Card.

• Protective Gear is here if you take quite some Mental Trauma, and it can also be paid by Bruiser.

• Scout Ahead first and Fang of Tyr'thrha later to deal with your Signature Weakness: Smite the Wicked or move around the board quickly to help your partners.

• Evidence! is a bit of a "fill up card" that can always speed up the game and is quickly replaced.

• Guts is here because your natural high level of makes it almost sure that you succeed in an Encounter/Parley Test if you commit Guts, and it replaces itself which is always great.

• In the Thick of It that I use to access Machete and Brand of Cthugha and take 2 physical trauma, that I can heal with Emergency Aid, and my Allies give me a good Health soak pool if necessary.

Link to the Full xp Deck

•• To get Guard Dog and Beat Cop at the same time, or even 2 Beat Cops.

•• You can now tap damage at will and refill your Cops with Bandages and Emergency Aid.

•• Bruiser is a bit like an Overpower every turn and pays for your setup. What is not to like.

•• With Bruiser and Brand of Cthugha down, you deal 5 damages in one action, so much more efficient than the .45 Automatic. I would keep this card in my hand if I had to deal with multiple enemies, making my Machete ineffective.

•• By this time, your Clue Getter should be good enough to get clues reliably. This also increases your card draw and helps you and your teammate set up.

•• The same economy, but and brings you more of what you love: enemies.

•• Fang is amazing to fight your Weakness and save any lost partner that pulled the wrong enemy during the Mythos Phase.

•• More charges and more damage by potentially successful attacks. If you have extra experience in the end, you can also consider buying a second one.

•• Luxury upgrade, in case you have a LOT of trauma. Bruiser pays for it, preventing you from some nasty Encounter Cards.

• I considered the latest taboo list for this Deck, but if you are new to the game or choose not to, you can always decide not to use the taboo. Get 2 Machete, Unexpected Courage or something and not takes 2 Physical Traumas from In the Thick of It :)

• This Deck is made using the EotE Investigator cards. If you only have the Revised Core and Dunwich, you can use This Link and check the Side Deck for Upgrade suggestions! Let me know if you have any questions ;)

• The Cyclopean Hammer is, of course, a weapon of choice for Zoey Samaras. I didn't add it because I felt like this weapon was a bit too good and made the game a bit less enjoyable after one campaign with it. Now, if you want it, then forget about Brand of Cthugha, Machete and get it!

•• You could imagine also adding On the Trail to bump an enemy, get to its location again, grab clues on the way and finish it.

• Prophetic is a good alternative to Bruiser as it pays for Fang of Tyr'thrha, Gang Up and Brand of Cthugha, but it's a bit less intuitive and gives 1 less damage on your Gang Up. You could also take 1 copy of each.

•• If you take Prophetic, then I would advise you to leave Protective Gear behind and take a second Brand of Cthugha (4) instead.

• If you are playing this Deck with only 1 collection and multiple of my pre-made Decks: BruiZ-oey, Clue Vacuuming Rex, True Ma-Jim or Pete and the Underdog, you can distribute the cards as follow:

•• Give 1 copy of Prepared for the Worst to "Ashcan" Pete and Jenny Barnes as Zoey Samaras already has 4 weapons.

•• Give 1 Ward of Protection to Rex Murphy and 1 to Jim Culver.

•• Give 2 Scout Ahead to Zoey Samaras and upgrade Jenny Barnes with The Red Clock earlier.

•• Give 2 Bruiser to "Ashcan" Pete and go for the Cyclopean Hammer for Zoey Samaras.

•• Give Divination to Jim Culver.