Duke is all at once, a Humble Succeeder, a Scrapper Scavenging for food and a Plucky companion with a heart of gold.

EDIT: If you liked these Decks, please try the Carcosa Beginner Deck Series:

Please press the ♥ even if you don't plan on playing the Deck just to give it some visibility for new players. 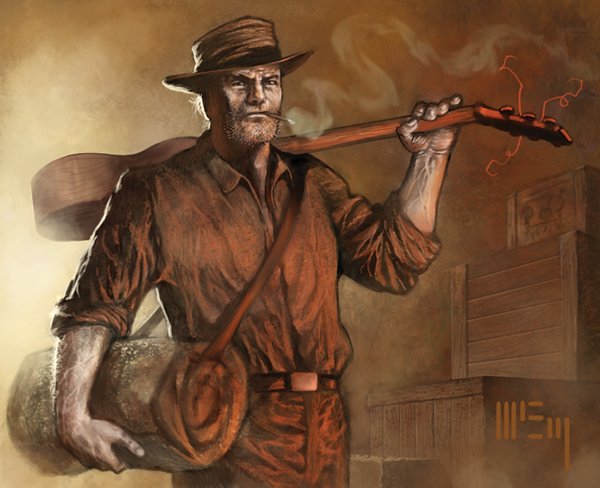 This Deck is part of a series of Decks created for the release of the Revised The Dunwich Legacy Campaign. Find the other Beginner Deck Guides for the other investigators here:

If you do not own The Edge of the Earth, an alternative only using the Revised Core and The Dunwich Legacy is available at the bottom in "Make your own Deck!"

With The Dunwich Legacy (TDL), players often experience their first entire 8-scenario campaign as a , getting to understand a whole new part of the game: killing enemies and finding clues does not have to come with high base stats.

"Ashcan" Pete was released with a set of cards allowing a so-called Dark Horse mode, named after the card that rewards an investigator for spending all of their resources, granting them +1 at all their skills. We are going to explore that mechanic as well as the Scavenging already mentioned in other investigators but never as well exploited as with "Ashcan" Pete that uses unplayed Items to trigger his and ready Duke.

Limiting ourselves to the newly released campaigns, Revised, The Edge of the Earth and The Dunwich Legacy, we will try to show how to make Pete a good flex investigator who can help find clues and fight enemies.

• Discard Items from your hands to ready Duke to get more uses of him and Scavenge them back for more use.

• Earn money while investigating with Dr. Milan Christopher and spend them while fighting with your Fire Axe to activate Dark Horse.

• Fail forward, using "Look what I found!", Eucatastrophe and Lucky! to get the best out of your unlucky Token pulls.

"Ashcan" Pete's allow you to discard any card from your hand to ready Duke. What does that mean?

We can see that Duke is a significant acceleration, giving us the equivalent of 1 extra action (whether it's a move or additional damage) and better chances of success. We should try to use it as often as possible, and to do so, the best way is to discard Items from your hand.

Scavenging lets you recur Items from your discard pile if you succeed at an investigation by 2 or more. Meaning that if you ready Duke by throwing away an Item, you can use the good boi to investigate and get it back immediately in case of success by 2.

Later in the campaign, Scavenging is also used for recurring Ice Pick (3) that is fast, so it comes back on the table easily as it is paid by both Bruiser and Crafty, allowing you to maintain Dark Horse online longer.

Note: You cannot Scavenge an item at the same turn when it is emptied or committed. You will have to empty it or commit it to a test, succeed or fail, discard it, and then scavenge it during another successful by 2 investigations. In our situation, though, if you discard the Item to ready Duke, you can get it back immediately after using him to investigate.

This Deck benefits from having 0 resources to get +1 to your skills thanks to Dark Horse.

There are 2 ways of using them: Paying for cards or boosting your stats with Fire Axe and Plucky (3)

The idea of the Deck is to gather resources during turns when you need to investigate, thanks to Dr. Milan Christopher (that I advise you to play with Taboo in order not to spoil the game too much). You are already investigating with +3 with Magnifying Glass, Dr. Milan Christopher and later Plucky (3). These boosts all apply to your tests using Duke which brings you at 7 . If need be, you can also decide to spend resources to boost your thanks to Plucky (3). Make sure to use Plucky (3) after a fight or you may loose it quite fast.

When it comes to fighting, try not to engage a fight with more than 3 resources. This is because 3 resources spent in your Fire Axe gives you +6 bringing you to 8 , you can then use Duke with Skill cards, or Bruiser and Jury-Rig to boost other attacks with the Fire Axe. This deck should be good enough for you to reliably land 3 2-damage attacks during one turn after the setup.

Every once in a while, you will not be able to overcommit, and an unlucky pull will make you fail your test.

If you failed by 2 or less, Lucky! will bring you back to success, or if you are brought to 0 (on purpose or not), you can play Eucatastrophe and ready Duke immediately.

Or Rabbit's Foot will reward you with a card, and you will still have a chance to get 2 clues with "Look what I found!".

• Flashlight is here either to be committed for +1 and be Scavenged, or to be played if you find it before Magnifying Glass.

• Jury-Rig is here to be used on Fire Axe for trying to succeed at attacking once you are already at 0 resources.

• Prepared for the Worst is an incredible way to balance the fact that there are only 2 weapons in 30 cards.

• Guts and Manual Dexterity are here to pass Encounter Tests, boosting your relatively high base stat.

• Overpower and Perception are good to commit during actions with Duke on hard tests to make it as sure as possible not to waste that action.

• Rise to the Occasion is good to balance your 2 base and . You will most likely spend it for a 4-shroud location and make it rather easy for you to collect a clue there thanks to your other static boosts, leading you to +3 on a basic Investigate action with Magnifying Glass and Dr. Milan Christopher on the table.

• Bruiser boosts your Fire Axe attacks when you do not have money anymore to commit and pays for you to replace your Ice Pick (3) when you scavenge it.

• Strength in Numbers will give you if you have Bruiser on the table, which should be enough to pass any test with just this card.

Link to the Full xp Deck

•• With Plucky (3), you make it to 5 which should protect you from most Encounter Tests. It also allows you to use your resources to boost your .

•• You can do this upgrade before or after Plucky (3). With Bruiser, you will succeed at more attacks with your Fire Axe once you are already at 0 resources.

•• With Dr. Milan Christopher/Magnifying Glass/Ice Pick (3) and Bruiser on the table, you get a whooping +5 for any test!!

•• To make better use of Scavenging and get clues/deal damage faster and with a better success rate with the +1 skill.

•• A little bit more a Luxury upgrade, it allows you to gain a lot of tempo: turn a failure into a success AND ready Duke to gain further benefits in your following action.

•• Helps to spend some resources to boost either some Encounter Test or to boost an attack with Duke and to make sure that you do not end up with more than 3 resources before attacking with your Fire Axe.

• If you do not have access to The Edge of the Earth cards, you can use this Deck variant. The strategy is roughly the same, in addition to playing Try and Try Again in case you commit some cards and fail.

• If you are playing this Deck with only 1 collection and multiple of my pre-made Decks: BruiZ-oey, Clue Vacuuming Rex, True Ma-Jim or Pete and the Underdog, you can distribute the cards as follow:

•• Give 1 copy of Prepared for the Worst to "Ashcan" Pete and Jenny Barnes as Zoey Samaras already has 4 weapons.

•• Give 1 Ward of Protection to Rex Murphy and 1 to Jim Culver.

•• Give 2 Scout Ahead to Zoey Samaras and upgrade Jenny Barnes with The Red Clock earlier.

•• Give 2 Bruiser to "Ashcan" Pete and go for the Cyclopean Hammer for Zoey Samaras.

•• Give Divination to Jim Culver.